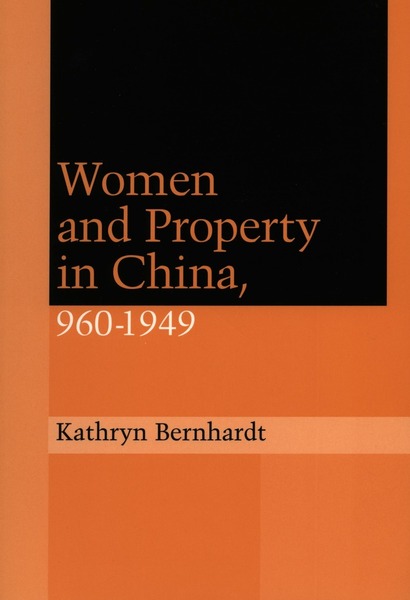 Previous scholarship has presented a static picture of property inheritance in China, mainly because it has focused primarily on men, whose rights changed little throughout the Imperial and Republican periods. However, when our focus shifts to women, a very different and dynamic picture emerges.

Drawing on newly available archival case records, this book demonstrates that women’s rights to property changed substantially from the Song through the Qing dynasties, and even more dramatically under the Republican Civil Code of 1929-30. The consolidation in law of patrilineal succession in the Ming and Qing dynasties curtailed women’s claims, but the adoption of the Civil Code and the gradual dismantling of patrilineal succession in the twentieth century greatly strengthened women’s rights to inherit property.

Kathryn Bernhardt is Professor of History at the University of California, Los Angeles.

"This is an original and wholly new analysis of changes in women's inheritance rights in China. . . . With her mastery of the legal code and the language of casebooks, as well as her access to unique archival collections, Bernhardt's findings rest on an irreproachable mass of data; the book is a classic example of careful scholarship."

"Using research from 430 actual cases during the period covered . . . Bernhardt emphasizes how the laws were applied in practice rather than what those laws actually mandated. . . . As such, the book is a valuable addition to scholarship on Chinese history, and more specifically the complex history of Chinese women."

"A particularly impressive contribution of this book is its sketch of long-term trends in Chinese inheritance law from the Song through Qing periods. . . . Bernhardt's findings here are important and raise many questions for social and cultural historians to tackle, both concerning the cultural environment that led to these legal innovations and the impact of them on the choices families mad as they maneuvered around the law. . . . Bernhardt has immersedherself in Chinese legal writings and excels at explicating judges' decisions."

"Bernhardt's impressives study . . . will greatly facilitate comparative study of the concepts of family and property and takes research on legal reform in modern China to a new level."

"The book demonstrates the difficulties involved in changing norms embedded in a society over a long period of time. It also gives us insights into the problems when foreign concepts are introduced, as well as going into the importance of changes in inheritance rules for family relations, status, the economic situation, etc. Those who deal with issues involved in the introduction of ownership of property by women and rights of inheritance on the part of women in societies in which these concepts are still unknown should definitely read this book."

"Kathryn Bernhardt has written a highly readable and impressive book with much to recommend it. The scope of her analysis and the range of material she uses set a new high standard in the field. Many of her conclusions will be influential. . . ."

"This superbly researched monograph explodes many myths about the inheritance of property in imperial and Republican China precisely because it focuses on women in the intergenerational transfer of property. Kathryn Bernhardt's many significant reinterpretations also rest on a mountain of new evidence from diverse archival and published sources."

"This is a fascinating, well-researched, and carefully argued study..."