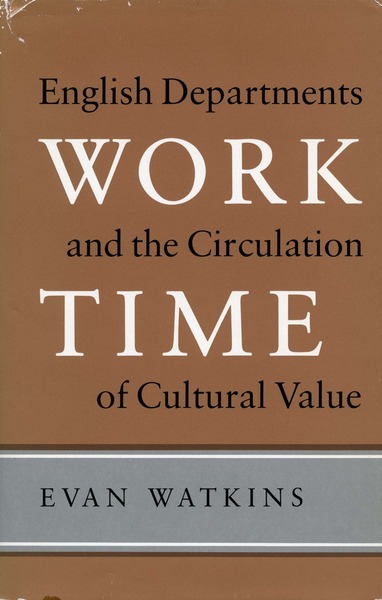 This book shares with a number of recent studies an interest in the historical development of English in the United States, in how it became a central discipline in the humanities, and in what the ideological affiliations of literature and literary study might be. It is strikingly original, however, in that instead of focusing on the subject matter of English (e.g., the canon or critical positions), as most recent studies, it examines precisely how work time is spent within English departments, as well as what circulates through them, and to where. For in terms of immediate social authority, such activities as writing letters of recommendation are more directly relevant than critical methodology.

The author concludes by locating cultural work in English between such massively capitalized sites of cultural production as television and advertising, and "popular cultures," meaning what people do every day with whatever is cheaply available to them. English is like the former in that it requires highly developed, socially certified skills and knowledges. Like popular cultures, however, work in English is carried out with readily available material means. By recognizing this actual situation, he argues, one can view English as not just passively reproducing the existing system of social values, but as working within popular culture to provide the possibility of meaningful political opposition.

Evan Watkins is Professor of English at the University of California Davis, and the author of The Critical Act: Criticism and Community.

“A new and nuanced reformulation of an enduring leftist slogan: the duty of the revolutionary is to make the revolution.” —boundary 2