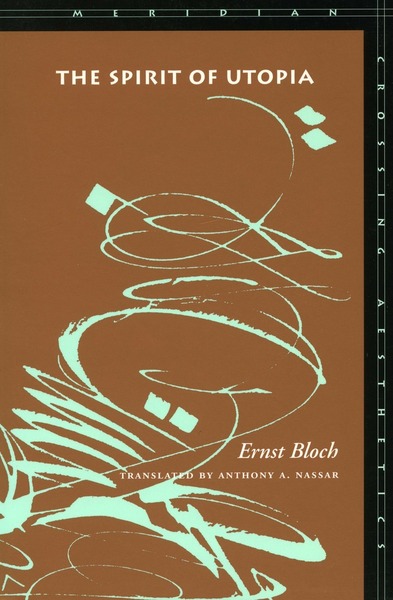 That is enough. Now we have to start.

These are the opening words of Ernst Bloch's first major work, The Spirit of Utopia, written mostly in 1915-16, published in its first version just after the First World War, republished five years later, 1923, in the version here presented for the first time in English translation.

The Spirit of Utopia is one of the great historic books from the beginning of the century, but it is not an obsolete one. In its style of thinking, a peculiar amalgam of biblical, Marxist, and Expressionist turns, in its analytical skills deeply informed by Simmel, taking its information from both Hegel and Schopenhauer for the groundwork of its metaphysics of music but consistently interpreting the cultural legacy in the light of a certain Marxism, Bloch's Spirit of Utopia is a unique attempt to rethink the history of Western civilizations as a process of revolutionary disruptions and to reread the artworks, religions, and philosophies of this tradition as incentives to continue disrupting.

The alliance between messianism and Marxism, which was proclaimed in this book for the first time with epic breadth, has met with more critique than acclaim. The expressive and baroque diction of the book was considered as offensive as its stubborn disregard for the limits of "disciplines." Yet there is hardly a "discipline" that didn't adopt, however unknowingly, some of Bloch's insights, and his provocative associations often proved more productive than the statistical account of social shifts.

The first part of this philosophical meditation—which is also a narrative, an analysis, a rhapsody, and a manifesto—concerns a mode of "self-encounter" that presents itself in the history of music from Mozart through Mahler as an encounter with the problem of a community to come. This "we-problem" is worked out by Bloch in terms of a philosophy of the history of music. The "self-encounter," however, has to be conceived as "self-invention," as the active, affirmative fight for freedom and social justice, under the sign of Marx. The second part of the book is entitled "Karl Marx, Death and the Apocalypse."

I am. We are. That's hardly anything.

But enough to start.

“When this book was first published, it had a profound effect on major thinkers and artists in Weimar Germany. A poetical philosophical treatise with unusual insights into culture and political commentary, Bloch’s book laid the groundwork for thinkers like Adorno and Benjamin.” —Jack Zipes, University of Minnesota