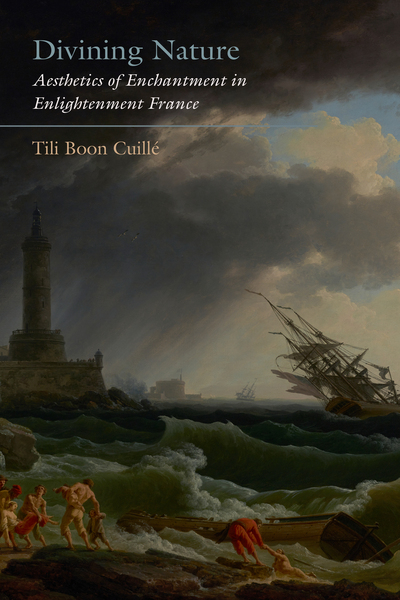 The Enlightenment remains widely associated with the rise of scientific progress and the loss of religious faith, a dual tendency that is thought to have contributed to the disenchantment of the world. In her wide-ranging and richly illustrated book, Tili Boon Cuillé questions the accuracy of this narrative by investigating the fate of the marvelous in the age of reason.

Exploring the affinities between the natural sciences and the fine arts, Cuillé examines the representation of natural phenomena—whether harmonious or discordant—in natural history, painting, opera, and the novel from Buffon and Rameau to Ossian and Staël. She demonstrates that philosophical, artistic, and emotional responses to the "spectacle of nature" in eighteenth-century France included wonder, enthusiasm, melancholy, and the "sentiment of divinity." These "passions of the soul," traditionally associated with religion and considered antithetical to enlightenment, were linked to the faculties of reason, imagination, and memory that structured Diderot's Encyclopédie and to contemporary theorizations of the sublime. As Cuillé reveals, the marvelous was not eradicated but instead preserved through the establishment and reform of major French cultural institutions dedicated to science, art, religion, and folklore that were designed to inform, enchant, and persuade.

This book has been made possible in part by the National Endowment for the Humanities: Exploring the human endeavor.

Tili Boon Cuillé is Associate Professor of French and Comparative Literature at Washington University in St. Louis. She is the author of Narrative Interludes: Musical Tableaux in Eighteenth-Century French Texts (2006).

"Genuinely interdisciplinary and drawing on an astonishing range of sources, Divining Nature is a remarkable achievement. Tili Boon Cuillé demonstrates that enchantment and the sentiment of the divine lie at the heart of scientific and aesthetic debates in the eighteenth century and are in no way antithetical to the spirit of the Enlightenment."

"Overturning a number of critical and historical clichés about the Enlightenment's role in disenchanting the world, Tili Boon Cuillé recovers a bold and original vision of the continuing role that enchantment played in the Age of Reason in France."

"Divining Nature is laudably ambitious. In a moment of strident and sometimes caricatural critique of the Enlightenment as a bastion of whiteness, colonial violence, and epistemic imperialism, Divining Nature offers a more capacious, nuanced, and agile vision, one based on epistemological humility, the transcendence of personal, cultural, and conceptual boundaries, and the rooting of aesthetic pleasure in the sympathetic identification with the other."

"Tili Boon Cuillé's newest book, Divining Nature, is a truly valuable contribution to the state of French Enlightenment studies today, convincingly demonstrating what is becoming increasingly apparent: that this movement was neither a clean break with the past, nor a definitive rejection of religion and spirituality, nor a neat split between the sciences and the arts."