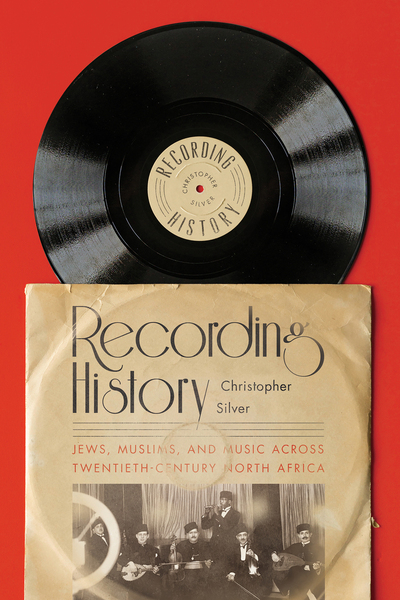 A new history of twentieth-century North Africa, that gives voice to the musicians who defined an era and the vibrant recording industry that carried their popular sounds from the colonial period through decolonization.

If twentieth-century stories of Jews and Muslims in North Africa are usually told separately, Recording History demonstrates that we have not been listening to what brought these communities together: Arab music. For decades, thousands of phonograph records flowed across North African borders. The sounds embedded in their grooves were shaped in large part by Jewish musicians, who gave voice to a changing world around them. Their popular songs broadcast on radio, performed in concert, and circulated on disc carried with them the power to delight audiences, stir national sentiments, and frustrate French colonial authorities.

With this book, Christopher Silver provides the first history of the music scene and recording industry across Morocco, Algeria, and Tunisia, and offers striking insights into Jewish-Muslim relations through the rhythms that animated them. He traces the path of hit-makers and their hit records, illuminating regional and transnational connections. In asking what North Africa once sounded like, Silver recovers a world of many voices—of pioneering impresarios, daring female stars, cantors turned composers, witnesses and survivors of war, and national and nationalist icons—whose music still resonates well into our present.

Christopher Silver is the Segal Family Assistant Professor in Jewish History and Culture at McGill University. He is the founder and curator of the website Gharamophone.com, a digital archive of North African records from the first half of the twentieth century.

"Masterfully orchestrating the sounds of the North African music industry, Recording History provides a fresh and unique tune to North African history. Analyzing the silences, echoes, and sounds of Jewish-Muslim relations, this delightful book is a classic in the making."

"Recording History is a highly original transnational study that masterfully fills an important gap in the history of popular culture in Tunisia, Morocco, and Algeria. By astutely listening to the past, Christopher Silver paints a rich and complex picture of North African music, aural culture, and recording history."

"Christopher Silver's noble quest to bring this lost world back to life, via obscure Maghrebi music stores and dusty boxes of shellac records in Montreal and Paris, allows us to restore its missing notes and fill in a silence in the soundtrack of our history."

"Silver's contribution to the rapidly growing field of Sephardic Studies is a great achievement. I commend him for his active efforts to not only rescue this history from obscurity, but to bring it back to life and share it with the world."

New Books Network
Muslims and Jews in the Maghreb: A whispered history