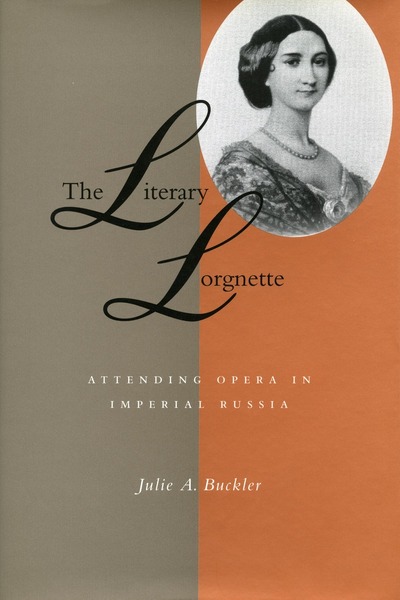 Winner of the 2000 Best Work of Literary/Cultural Criticism Award, sponsored by the American Association of Teachers of Slavic and East European Languages.

The "Golden Age" of opera-going in Russia, from the 1840s through the 1880s, coincided with the flourishing of Russian prose realism. During this period, opera and literature exerted a reciprocal influence on one another, each adopting and providing a new context for the other's artistic conventions. Opera permeated the culture of the drawing room so often depicted in literature, and literature simultaneously discovered the opera theater. The relationship between these two artistic genres inspired the use of performative models and conventions in Russian literary art, and led to the interpolation of specific operatic subtexts into literature and life.

To many, these genres were antithetical, since opera historically aimed for the high stylistic register, and prose fiction experimented with the low. But the author shows that the attempt to translate opera into prosaic contemporary lives was characteristic of nineteenth-century Russia, since literature provided an alternative cultural theater in Russia to which the opera theater was analogous and parallel. As contested and self-regarding social space, the opera theater offered its visitors a rare public forum. The reception of opera as an art form in Russia resembles the impact of the early cinema on Russian audiences in the early twentieth century, since opera and film both brought about an aesthetic reconfiguring of social space.

This book treats opera-going in imperial Russia from multiple perspectives, and discusses such canonical works as Tolstoy's Anna Karenina and Goncharov's Oblomov, major operatic works including Tchaikovsky's Eugene Onegin and Verdi's La Traviata, the impact of Western opera in Russia and the Russian-style prima donna. The book engages with poems, sketches, feuilletons, stories, and rarely-discussed Russian novels, as well as non-fictional reminiscences, reviews, and visual images. Throughout, the book is enriched with examples and anecdotes about performers, spectators, and critics, and reception histories of specific operatic works.

Julie A. Buckler is Assistant Professor of Slavic Languages and Literatures at Harvard University.

"Buckler's book is the first serious English-language scholarship on Russian opera to be published since the Gorbachev/Yeltsin thaw. . . . The strengths of the book are twofold: revelation of new evidence discovered in archives in St. Petersburg and Moscow and exegesis of the process by which texts circulated between opera and prose literature. . . . Buckler is to be commended for her keen analyses of meta-theatrical novels and stories by lesser-known nineteenth-century authors. . . ."

"This monograph should be of interest to anyone concerned with nineteenth century Russian cultural life. . . . Readers of this monograph can only hope that [Buckler] will continue further research . . . and produce more work as rewarding as this book."

"The greatest attribute of The Literary Lorgnette . . . .is its wealth of information. Thanks to diligent research, Julie A. Buckler . . . .paints a detailed picture of nineteenth-century Russian opera culture. By the end of the book, the reader has learned about seminal Western and Russian operas; the custom of opera-going; major personalities; and how opera permeated literature."