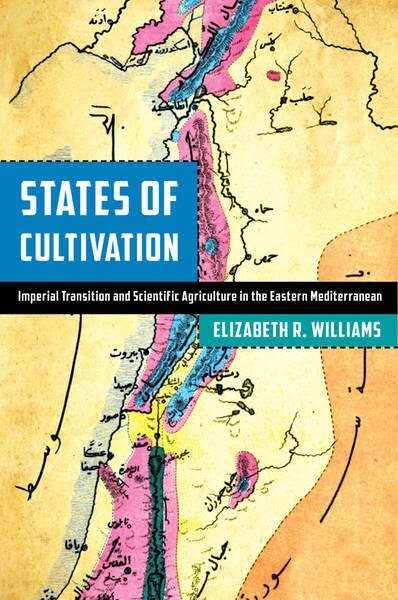 The final decades of the Ottoman Empire and the period of the French mandate in Syria and Lebanon coincided with a critical period of transformation in agricultural technologies and administration. Chemical fertilizers and mechanized equipment inspired model farms while government officials and technocratic elites pursued new land tenure, credit-lending, and tax collection policies to maximize revenue. These policies transformed rural communities and environments and were central to projects of reform and colonial control—as well as to resistance of that control.

States of Cultivation examines the processes and effects of agrarian transformation over more than a century as Ottoman, Syrian, Lebanese, and French officials grappled with these new technologies, albeit with different end goals. Elizabeth Williams investigates the increasingly fragmented natures produced by these contrasting priorities and the results of their intersection with regional environmental limits. Not only did post–World War I policies realign the economic space of the mandate states, but they shaped an agricultural legacy that continued to impact Syria and Lebanon post-independence. With this book, Williams offers the first comprehensive account of the shared technocratic ideals that animated these policies and the divergent imperial goals that not only reshaped the region's agrarian institutions, but produced representations of the region with repercussions well beyond the mandate's end.

Elizabeth R. Williams is Assistant Professor of History at the University of Massachusetts Lowell.

"Transgressing temporal divides and diving into the central but hitherto neglected spaces of the countryside, Elizabeth Williams takes us on a fascinating adventure through technology, infrastructure, and policy. States of Cultivation offers a new lens not simply on the Eastern Mediterranean, but on land itself as the site where politics and ecology are intimately bound."

"Focusing on the development of agronomic expertise, Elizabeth Williams places agrarian transformation at the heart of historical scholarship. States of Cultivation boasts a flowing narrative magnificently documented, a strong yet unforced argument, and a respect for the voices of the region that spoke and wrote on the making of life in agriculture."

"States of Cultivation is an essential history of the agricultural technologies that swept the globe in the late nineteenth and early twentieth centuries, trailing promises to remake the countryside for the benefit of nations and empires. Required reading for those of us who seek to understand the origins and perversities of the twentieth-century romance with 'development.'"