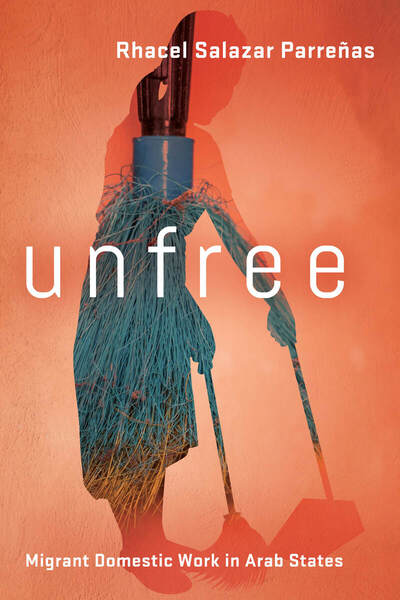 Winner of the 2022 Choice Award for Outstanding Academic Title, sponsored by the American Library Association.

Honorable Mention in the 2022 Alice Amsden Book Award, sponsored by the Society for the Advancement of Socio-Economics (SASE).

A stirring account of the experiences of migrant domestic workers, and what freedom, abuse, and power mean within a vast contract labor system.

In the United Arab Emirates, there is an employment sponsorship system known as the kafala. Migrant domestic workers within it must solely work for their employer, secure their approval to leave the country, and obtain their consent to terminate a job. In Unfree, Rhacel Salazar Parreñas examines the labor of women from the Philippines, who represent the largest domestic workforce in the country. She challenges presiding ideas about the kafala, arguing that its reduction to human trafficking is, at best, unproductive, and at worst damaging to genuine efforts to regulate this system that impacts tens of millions of domestic workers across the globe.

The kafala system technically renders migrant workers unfree as they are made subject to the arbitrary authority of their employer. Not surprisingly, it has been the focus of intense scrutiny and criticism from human rights advocates and scholars. Yet, contrary to their claims, Parreñas argues that most employers do not abuse domestic workers or maximize the extraction of their labor. Still, the outrage elicited by this possibility dominates much of public discourse and overshadows the more mundane reality of domestic work in the region. Drawing on unparalleled data collected over 4 years,this book diverges from previous studies as it establishes that the kafala system does not necessarily result in abuse, but instead leads to the absence of labor standards. This absence is reflected in the diversity of work conditions across households, ranging from dehumanizing treatment, infantilization, to respect and recognition of domestic workers.

Unfree shows how various stakeholders, including sending and receiving states, NGOs, inter-governmental organizations, employers and domestic workers, project moral standards to guide the unregulated labor of domestic work. They can mitigate or aggravate the arbitrary authority of employers. Parreñas offers a deft and rich portrait of how morals mediate work on the ground, warning against the dangers of reducing unfreedom to structural violence.

Rhacel Salazar Parreñas is Professor of Sociology and Gender and Sexuality Studies at the University of Southern California. She is the author of numerous books, including Illicit Flirtations: Labor, Migration and Sex Trafficking in Tokyo, and Children of Global Migration: Transnational Families and Gendered Woes. She is the recipient of the 2019 Jessie Bernard Award from the American Sociological Association.

"Challenging standard interpretations of migrant women's powerlessness and oppression, Rhacel Salazar Parreñas offers a pathbreaking account of Filipino domestic workers in the United Arab Emirates. A compelling contribution not only to studies of migration and labor but also to economic sociology."

"I have long been impressed by the distinctive ways in which Parreñas generates her analysis of diverse social conditions. These analytic modes emerge once again in her latest book Unfree, one phrase that contains a vastness of meanings. This is a must-read."

"In this impressive ethnography, Parreñas illuminates moral harms associated with 'unfree labor' and offers new insights into the quandary that arises when redress for those harms lays well beyond the laws of sending states, receiving states, and international organizations."

"Locating unfreedom in the sponsorship system that gives free reign to sponsors over their employees,Unfree lays a critical foundation for future scholarly, legal, and policy interventions in migrant domestic work, both in the Arab world and beyond. Excellent for anyone working on labor and migration. Highly Recommended."

"Unfree guides us through the transnational mobility of these domestic workers and their subsequent economic immobility. Using relatively plain language, the book is accessible to academic and non-academic audiences from disparate disciplinary backgrounds who are interested in understanding Filipino domestic work in the UAE beyond victimhood."

"A powerful, pathbreaking book that upends many (Orientalist) assumptions about migrant domestic work in Arab states, Unfree is set to become a classic."