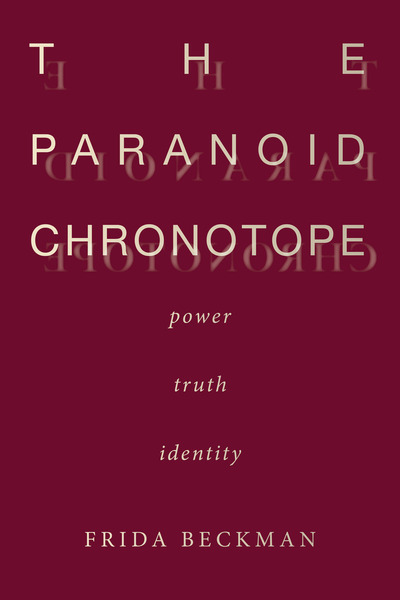 Why does it seem like our everyday life is shadowed by something menacing? This book identifies and illuminates paranoia as a significant feature of contemporary American society and culture. Centering on what it identifies as three key dimensions – power, truth, and identity – in three different contexts – society, literature, and critique – the book explores and explains the increasing influence of paranoid thinking in American society during the second half of the twentieth century and first decades of the twenty-first, a period that has seen the rise of control systems and neoliberal ascendency.

Inquiring about the predominance of white, male, American subjects in paranoid culture, Frida Beckman recognizes the antagonistic maintenance and fortification of a conception of the autonomous individual that perceives itself to be under threat. Identifying such paranoia as emerging from an increasingly disjunctive relation between this conception of the subject and the changing nature of the public sphere, she develops the concept of the paranoid chronotope as a tool for the theoretical analysis of social, literary, and critical practices today. Investigating twenty-first century paranoid fictions, New Sincerity novels, conspiracist online culture, and postcritique, Beckman shows how the paranoid chronotope constitutes a recurring feature of modern consciousness.

Frida Beckman is Professor of Literature at Stockholm University. She is the author of Gilles Deleuze (2017), Culture Control Critique: Allegories of Reading the Present (2016), and Between Desire and Pleasure: A Deleuzian Theory of Sexuality (2013).

"An impressively incisive and comprehensive account of the way suspicion continues to haunt modern democratic societies. Beckman ranges over an extraordinary body of material in this consistently illuminating book."

"Beckman does a terrific job of seeing how, as the conspiracy theorist believes, everything is connected. An ambitious and exceptionally wide-ranging discussion of paranoia as a way of making sense of power, truth, and identity in recent decades."