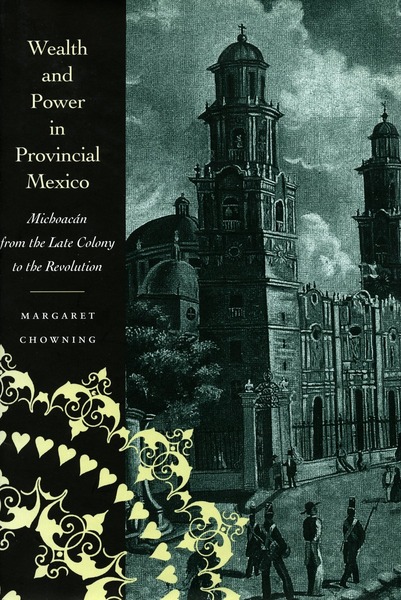 Unprecedented in the historiography of post-independence Mexico for its combination of rich archival detail and chronological scope, this book focuses on the wealthy men and women of the state of Michoacán from the last decades of colonial rule to the 1910 Revolution. The breadth of its documentary base and the sweeping span of time it covers transcend narrow social history to enlarge our understanding of the economic, political, and intellectual history of nineteenth-century Mexico.

Though not primarily a study of development or politics, the book nonetheless suggests strikingly original answers to the central question about Mexico’s first century as a nation: to what can we attribute the failures of the Mexican economy and the Mexican political system? Among her major findings, the author concludes that for Michoacán, at least, Mexico’s “nineteenth-century depression” was in fact two distinct economic collapses—one following the wars of the insurgency and the other coming after the Reform of the late 1850’s—separated by a period of relative prosperity in the 1840’s and early 1850’s.

The author further argues that the post-Reform downturn was experienced differently by elites and the middle classes from the post-1810 depression, not least because wealthy landowners were able to hold on to most of their property and ultimately to forge a mutually beneficial relationship with the middle-class liberal politicians who dominated officeholding in the second half of the nineteenth century.

The author’s view of the Reform also departs from conventional wisdom, which has either emphasized its many deficiencies or treated it as only one of many episodes of political turmoil that disrupted the economy and exacerbated an ongoing pattern of decline. She finds that though the Reform undoubtedly contributed to the “second” nineteenth-century depression in the short run, at the same time it eventually accomplished much of what the liberals had hoped for: it opened up the provincial (and presumably national) economy and created space for the upwardly xmobile middle class.

This book, then, argues for a vision of Mexico’s nineteenth century in which the Reform is the central, watershed event, not just in the lives of wealthy people in Michoacán or in the history of Mexican liberalism, but in Mexico’s political and economic trajectory since independence.

Margaret Chowning is Associate Professor of History at the University of California, Berkeley.

"The intellectual content of the book is arresting and guarantees that Wealth and Power in Provincial Mexico will enjoy a respected place in nineteenth-century historiography. . . . [It] should offer a critical orientation for future studies of western Mexico, and it will serve to remind scholars of the many cross-currents hidden within seemingly homogenous national doctrines such as Liberalism."