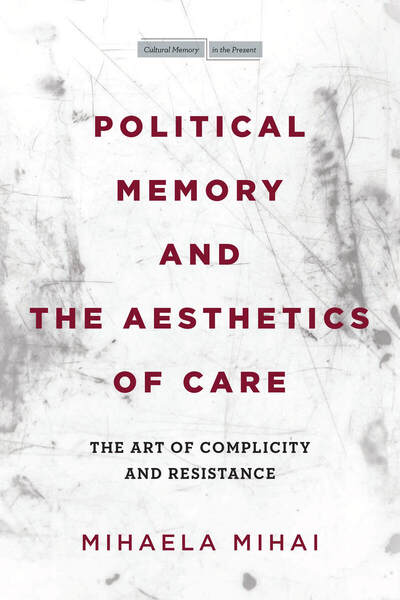 Political Memory and the Aesthetics of Care
The Art of Complicity and Resistance
Mihaela Mihai
SERIES: Cultural Memory in the Present

With this nuanced and interdisciplinary work, political theorist Mihaela Mihai tackles several interrelated questions: How do societies remember histories of systemic violence? Who is excluded from such histories' cast of characters? And what are the political costs of selective remembering in the present?

Building on insights from political theory, social epistemology, and feminist and critical race theory, Mihai argues that a double erasure often structures hegemonic narratives of complex violence: of widespread, heterogeneous complicity and of "impure" resistances, not easily subsumed to exceptionalist heroic models. In dialogue with care ethicists and philosophers of art, she then suggests that such narrative reductionism can be disrupted aesthetically through practices of "mnemonic care," that is, through the hermeneutical labor that critical artists deliver—thematically and formally—within communities' space of meaning. Empirically, the book examines both consecrated and marginalized artists who tackled the memory of Vichy France, communist Romania, and apartheid South Africa. Despite their specificities, these contexts present us with an opportunity to analyze similar mnemonic dynamics and to recognize the political impact of dissenting artistic production.

"Elegantly written and masterfully argued, Mihai's book contributes to debates about the critical role of art in resisting systemic violence and its political oblivion. With outstanding theoretical sophistication, exceptional interdisciplinary breadth, and remarkable empirical depth,it theorizes critical artistic practices as forms of mnemonic care for healthy hermeneutical climates. This book is a must-read for anyone interested in the difficult work of resisting the mystification of the past and working toward social justice."

"An eloquent and pathbreaking work of political theory that is deeply engaged with history and culture. Resolutely interdisciplinary and comparative, it provides stunningly illuminating insights into the everyday forms of complicity that prop up unjust regimes and the ordinary forms of resistance through which citizens contest domination."

"Mihai once again challenges received wisdoms about the right way for nations to deal with histories of systemic violence. She makes a compelling case for messier, less triumphalist narratives of the past in favour of the ethical ambiguity of how resistance and complicity actually unfold."