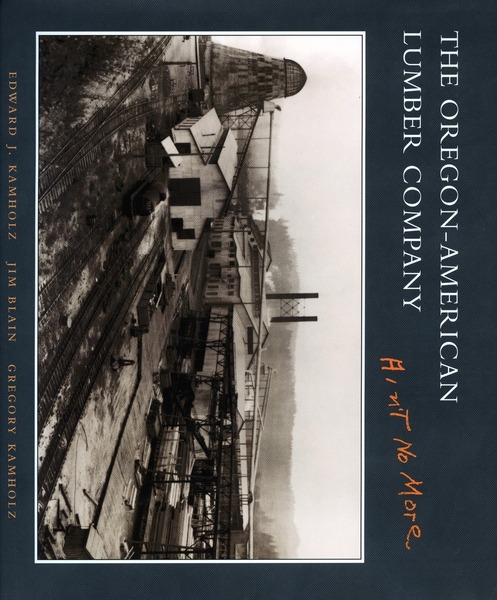 This is a lavishly illustrated history of the Oregon-American Lumber Company, during its heyday one of the most important lumber firms in the Pacific Northwest. Operating from 1922 until its closure in 1957, the company provides an illuminating example of the history of lumbering in the region, showing in detail both the opportunities and problems encountered by firms seeking to exploit the area’s rich natural stands of Douglas fir. The story is enhanced by the inclusion of 285 illustrations, most of which are previously unpublished, that depict logging, railroading, and sawmilling activities, and 17 period-specific maps that give the reader a unique perspective on the growth of the company.

The lumbering industry was pivotal to America’s settlement and development, reaching its zenith in the period covered by this book, which shows how Oregon-American’s survival depended on successfully adapting to great changes in market forces and in industry structures, to natural disasters, and to economic crises like the Great Depression. Essential to the company’s objective of supplying lumber to markets in the Midwest farm belt was its relationship with the Great Northern and Northern Pacific Railroads; accordingly, the book provides much information on the railroad networks that made timber extraction possible.

The study is based on fifteen years of archival and on-the-ground research and draws heavily on the extensive collection of Oregon-American records, notably the correspondence files of Judd Greenman, the company president who conceived and executed most of the company’s operating policies. It also includes, as sidebars, engaging oral histories related by employees, which enrich the text and provide a vivid contrast between management and employee viewpoints.

Two of the authors grew up in Vernonia, Oregon, home of Oregon-American operations. The other was a summer resident. Edward J. Kamholz is a graphic designer in San Carlos, California. Jim W. Blain is a retired Senior Staff Engineer at Lockheed Martin Missiles and Space Operations, Sunnyvale, California. Gregory Kamholz is a locomotive engineer with the Burlington Northern Santa Fe Railway.

“The authors have done an excellent job of original research on a single Pacific Northwest lumber operation, placed within the context of the larger story of the U.S. lumber industry. They had the luxury of drawing from virtually intact company records, which they have used to create a coherent business framework for the company’s thirty-year history. The book is not only an important benchmark in the rediscovery of Pacific Northwest logging history, but it also provides a high standard for future logging histories of any region.”—Bruce MacGregor, Author of several books on Western railroad history