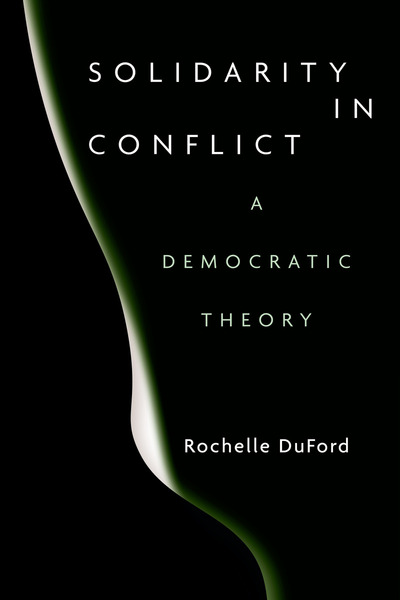 Democracy has become disentangled from our ordinary lives. Mere cooperation or ethical consumption now often stands in for a robust concept of solidarity that structures the entirety of sociality and forms the basis of democratic culture. How did democracy become something that is done only at ballot boxes and what role can solidarity play in reviving it? In Solidarity in Conflict, Rochelle DuFord presents a theory of solidarity fit for developing democratic life and a complementary theory of democracy that emerges from a society typified by solidarity.

DuFord argues that solidarity is best understood as a set of relations, one agonistic and one antagonistic: the solidarity groups' internal organization and its interactions with the broader world. Such a picture of solidarity develops through careful consideration of the conflicts endemic to social relations and solidarity organizations. Examining men's rights groups, labor organizing's role in recognitional protections for LGBTQ members of society, and the debate over trans inclusion in feminist praxis, DuFord explores how conflict, in these contexts, becomes the locus of solidarity's democratic functions and thereby critiques democratic theorizing for having become either overly idealized or overly focused on building and maintaining stability. Working in the tradition of the Frankfurt School, DuFord makes a provocative case that the conflict generated by solidarity organizations can address a variety of forms of domination, oppression, and exploitation while building a democratic society.

Rochelle DuFord is Assistant Professor of Philosophy at University of Hartford.

"A rich, nuanced, and compelling approach to an important and timely topic. DuFord's insightful, well-developed, and original account of solidarity makes a distinctive contribution to critical social theory and to progressive political theory more broadly."

—Amy Allen, author of Critique on the Couch

"This outstanding book offers an original approach to an issue in social and political theory that is at once perennial and highly topical: solidarity. DuFord tackles topics classical and current judiciously and insightfully."

"Clear and enjoyable to read, DuFord's book works through the steps and arguments about the purpose of solidarity in democratic theory and its place in the present moment...Solidarity in Conflict is a meaningful contribution in agonistic theories of democracy, how to think about the goals of solidary groups, and why the present prominence of authoritarianism should further attempts at building a nonexclusive vision of politics."