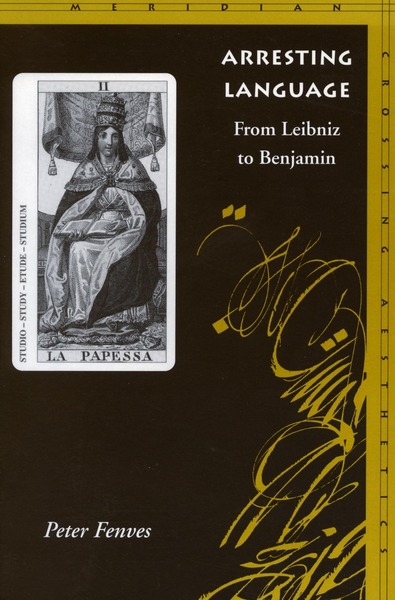 Speech act theory has taught us "how to do things with words." Arresting Language turns its attention in the opposite direction—toward the surprising things that language can undo and leave undone. In the eight essays of this volume, arresting language is seen as language at rest, words no longer in service to the project of establishing conventions or instituting legal regimes. Concentrating on both widely known and seldom-read texts from a variety of philosophers, writers, and critics—from Leibniz and Mendelssohn, through Kleist and Hebel, to Benjamin and Irigaray—the book analyzes the genesis and structure of interruption, a topic of growing interest to contemporary literary studies, continental philosophy, legal studies, and theological reflection.

Beginning with an exposition of Hölderlin's rigorous account of interruption in terms of the "pure word," in which the event of representation alone appears, Arresting Language identifies critical moments in philosophical and literary texts during which language itself—without any identifiable speaker—arrests otherwise continuous processes and procedures, including the process of representation and the procedures for its legitimization. The book then investigates a series of pure words: the fatal verdict (arrêt) of divine wisdom in Leibniz, the performance of Jewish ceremonial practices in Mendelssohn, the issuing of unauthorized arrest warrants in Kleist, fraudulent acts of storytelling in Hebel, the eruption of tragic silence and the "mass strike" in Benjamin, and the recurrence of angelic intervention in Irigaray.

At the center of this volume is a detailed explication of Benjamin's effort to transform Husserl's program for a phenomenological epoche into a paradoxically nonprogrammatic, paradisal epoche, by means of which the structure of paradise can be exactly outlined and the Messianic moment—as the ultimate event of arresting language—can at last appear to enter into its own.

Peter Fenves is Professor of German and Comparative Literary Studies and Adjunct Professor of Philosophy and Political Science at Northwestern University. Among his books is "Chatter": Language and History in Kierkegaard (Stanford, 1993).