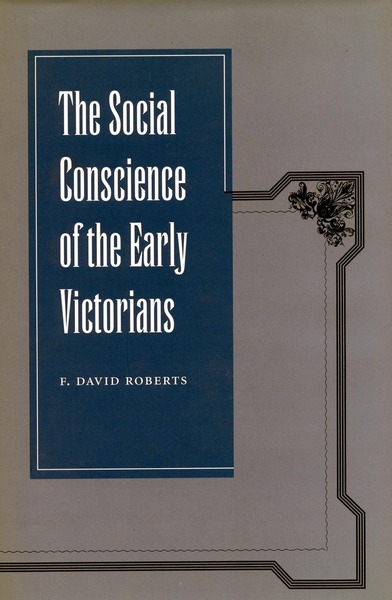 The Social Conscience of the Early Victorians
F. David Roberts

In 1830, the dominant social outlook of the early Victorians was a paternalism that looked to property, the Church, and local Justices of the Peace to govern society and deal with its ills. By 1860, however, the dominant social outlook had become a vision of a laissez faire society that relied on economic laws, self-reliance, and the vigorous philanthropy of voluntary societies. This book describes and analyzes these changes, which arose from the rapid growth of industry, towns, population, and the middle and working classes.

Paternalism did not entirely fade away, however, just as a laissez faire vision had long antedated 1830. Both were part of a social conscience also defined by a revived philanthropy, a new humanitarianism, and a grudging acceptance of an expanded government, all of which reflected a strong revival of religion as well as the growth of rationalism.

The new dominance of a laissez faire vision was dramatically evident in the triumph of political economy. By 1860, only a few doubted the eternal verities of the economists’ voluminous writings. Few also doubted the verities of those who preached self-reliance, who supported the New Poor Law’s severity to persons who were not self-reliant, and who inspired education measures to promote that indispensable virtue. If economic laws and self-reliance failed to prevent distress, the philanthropists and voluntary societies would step in. Such a vision proved far more buoyant and effective than a paternalism whose narrow and rural Anglican base made it unable to cope with the downside of an industrial-urban Britain.

But the vision of a laissez faire society was not without its flaws. Its harmonious economic laws and its hope in self-reliance did not prevent gross exploitation and acute distress, and however beneficent were its philanthropists, they fell far short of mitigating these evils. This vision also found a rival in an expanded government. Two powerful ideas—the idea of a paternal government and the idea of a utilitarian state—helped create the expansion of government services. A reluctant belief in governmental power thus joined the many other ideas that defined the Victorian’s social conscience.

David Roberts is Charles Collis Professor of History Emeritus at Dartmouth College. Among his books are Paternalism in Early Victorian England and Victorian Origins of the British Welfare State.

"Robert's research is remarkable, the breadth and depth of his knowledge marvellous, his conclusions always acute and often profound. While it is perhaps too often said that a book must be read by anyone interested in the Victorian period, in this case it is the literal truth."