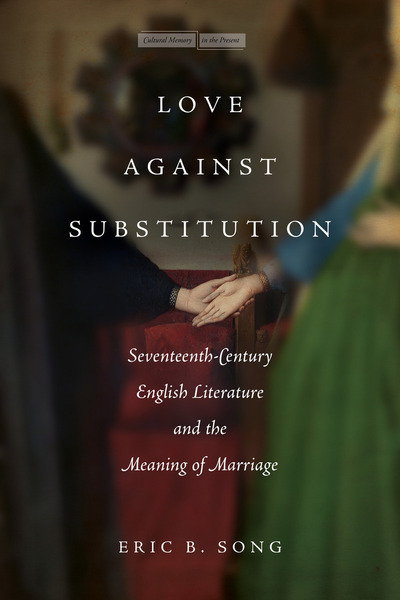 Love against Substitution
Seventeenth-Century English Literature and the Meaning of Marriage
Eric B. Song
SERIES: Cultural Memory in the Present

Are we unique as individuals, or are we replaceable? Seventeenth-century English literature pursues these questions through depictions of marriage. The writings studied in this book elevate a love between two individuals who deem each other to be unique to the point of being irreplaceable, and this vocabulary allows writers to put affective pressure on the meaning of marriage as Pauline theology defines it. Stubbornly individual, love threatens to short-circuit marriage's function in directing intimate feelings toward a communal experience of Christ's love.

The literary project of testing the meaning of marriage proved to be urgent work throughout the seventeenth century. Monarchy itself was put on trial in this century, and so was the usefulness of marriage in linking Christian belief with the legitimacy of hereditary succession. Starting at the end of the sixteenth century with Edmund Spenser, and then exploring works by William Shakespeare, William Davenant, John Milton, Lucy Hutchinson, and Aphra Behn, Eric Song offers a new account of how notions of unique personhood became embedded in a literary way of thinking and feeling about marriage.

Eric Song is Associate Professor of English Literature at Swarthmore College. He is the author of Dominion Undeserved: Milton and the Perils of Creation (2013).

"Love Against Substitution ranks among the most thoughtful and thorough works on the meaning of marriage. It's beautifully written and a joy to read."

"Eric Song's excellent new book reveals the central ideologeme of modern love to be 'Embrace me, my irreplaceable you,' a grasping for unique attachment in a world where all else is fungible. Deftly interweaving gender studies, political theology, and affect theory, Love against Substitution elegantly explores the fraught relationship between the individual and communal identities of the liberal subject."