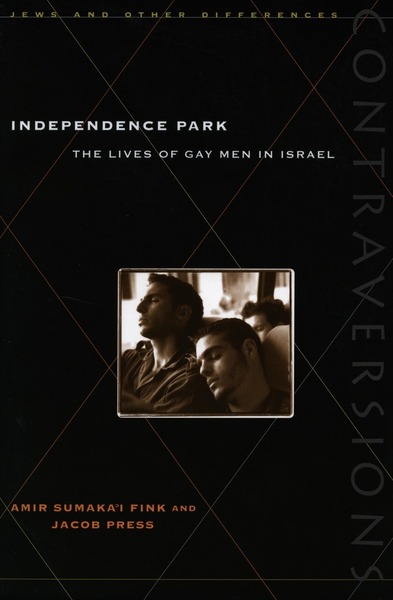 Independence Park, Tel Aviv, is the best-known meeting place for gay men in Israel; Independence Park, Jerusalem, is perhaps the second-best-known; and the hope for independence is the dominant theme of this wide-ranging collection of personal narratives told in the voices of twelve gay men representing a cross-section of contemporary Israeli society.

The speakers are Jew and Arab, ranging in age from 22 to 72. They include students and teachers, a waiter, a prostitute, a journalist, and a janitor. Some are married to women, some are “married” to men, some are single; their families come from Yemen, Germany, Morocco, Romania, Egypt, Russia. They talk about their family backgrounds and early childhood memories, their first stirrings of sexuality and responses to those feelings. They reveal their emotional struggles as well as their religious and political views.

The conviction structuring this book is that by allowing these men to render their different worlds in their own words, their voices will produce a layered chorus approximating the vibrant cacophony of the Israeli street. A remarkably rich assemblage of anthropological fieldwork, the book also can be read as literature—there are some fine storytellers here—or for pure human interest, as the narratives themselves are deeply moving.

This book, like a juicy novel, allows us to absorb the big ideas at stake in the maturation of Israel’s relationship to its gay, lesbian, and bisexual citizens by observing these ideas at play in individual lives. The twelve brave men who speak here tell gripping tales, by turns tragic and comic, joyful and somber, but all, ultimately, full of hope. I know of no better portrait, in English, of Israel at fifty.” —Ya’el Dayan