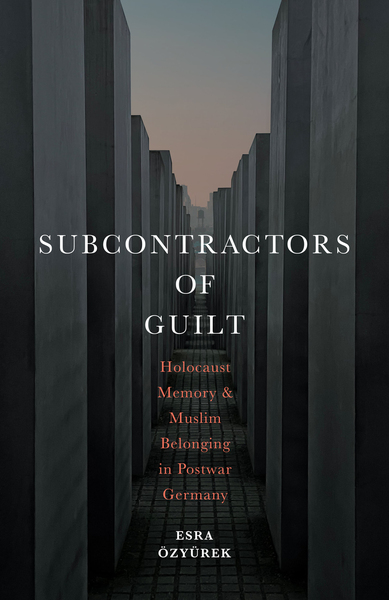 At the turn of the millennium, Middle Eastern and Muslim Germans had rather unexpectedly become central to the country's Holocaust memory culture—not as welcome participants, but as targets for re-education and reform. Since then, Turkish- and Arab-Germans have been considered as the prime obstacles to German national reconciliation with its Nazi past, a status shared to a lesser degree by Germans from the formerly socialist East Germany. It is for this reason that the German government, German NGOs, and Muslim minority groups have begun to design Holocaust education and anti-Semitism prevention programs specifically tailored for Muslim immigrants and refugees, so that they, too, can learn the lessons of the Holocaust and embrace Germany's most important postwar democratic political values.

Based on ethnographic research conducted over a decade, Subcontractors of Guilt explores when, how, and why Muslim Germans have moved to the center of Holocaust memory discussions. Esra Özyürek argues that German society "subcontracts" guilt of the Holocaust to new minority immigrant arrivals, with the false promise of this process leading to inclusion into the German social contract and equality with other members of postwar German society. By focusing on the recently formed but already sizable sector of Muslim-only anti-Semitism and Holocaust education programs, this book explores the paradoxes of postwar German national identity.

Esra Özyürek is the Sultan Qaboos Professor of Abrahamic Faiths and Shared Values at the University of Cambridge. She is the author of Being German, Becoming Muslim: Race, Religion, and Conversion in the New Europe (2015).

"Esra Özyürek has written a path-breaking and much needed book on the multifaceted, constitutive ways by which Turkish- and Arab-background migrants shaped German Holocaust memory and how it shaped their identity in return. Based on ethnographic research, this is a fundamental contribution that rewrites our understanding of the development of Holocaust memory in Germany"

—Alon Confino, author of A World Without Jews

"German Holocaust memory culture is often held up as a model for other nations to imitate. But, as Esra Özyürek shows in this provocative and ethnographically rich book, the story is much more complicated. Subcontractors of Guilt is a fascinating study of belonging and exclusion in post-Holocaust Germany and a must-read for all who are interested in contemporary Europe."

—Michael Rothberg, author of Multidirectional Memory: Remembering the Holocaust in the Age of Decolonization

"Subcontractors of Guilt is an essential intervention into contemporary German debates around migration, Muslim minorities, anti-Semitism, and Holocaust memory. By centering the perspectives of young German Muslims, Özyürek's insightful study offers an important corrective to narratives that too often fail to do so."