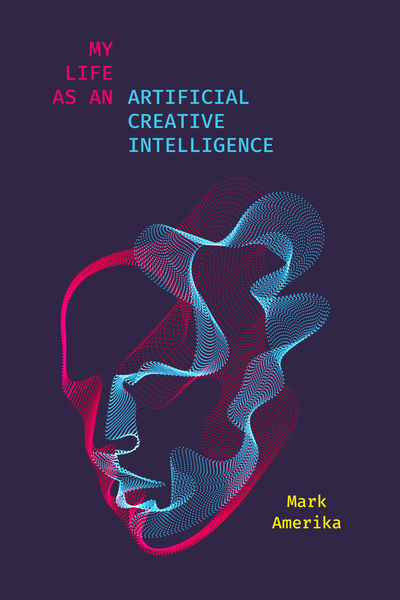 A series of intellectual provocations that investigate the creative process across the human-nonhuman spectrum.

Is it possible that creative artists have more in common with machines than we might think?

Employing an improvisational call-and-response writing performance coauthored with an AI text generator, remix artist and scholar Mark Amerika, interrogates how his own "psychic automatism" is itself a nonhuman function strategically designed to reveal the poetic attributes of programmable worlds still unimagined. Through a series of intellectual provocations that investigate the creative process across the human-nonhuman spectrum, Amerika critically reflects on whether creativity itself is, at root, a nonhuman information behavior that emerges from an onto-operational presence experiencing an otherworldly aesthetic sensibility. Amerika engages with his cyberpunk imagination to simultaneously embrace and problematize human-machine collaborations. He draws from jazz performance, beatnik poetry, Buddhist thought, and surrealism to suggest that his own artificial creative intelligence operates as a finely tuned remix engine continuously training itself to build on the history of avant-garde art and writing.

Playful and provocative, My Life as an Artificial Creative Intelligence flips the script on contemporary AI research that attempts to build systems that perform more like humans, instead self-reflexively making a very nontraditional argument about AI's impact on society and its relationship to the cosmos.

Mark Amerika is an internationally acclaimed media artist, novelist and theorist of digital culture. A Time Magazine 100 Innovator, Amerika's artwork has been exhibited at venues such as the Whitney Biennial of American Art, the Denver Art Museum, the Institute of Contemporary Arts in London, the National Museum of Contemporary Art in Athens and the Walker Art Center. He is a Professor of Distinction at the University of Colorado where he has served as the Founding Director of the Doctoral Program in Intermedia Art, Writing and Performance in the College of Media, Communication and Information and a Professor of Art and Art History.

"This book is so radically different from anything else out there, it has the potential to revolutionize the way you think about human history and the origins of the world."

"This book is an expression of the truth that you're a robot."

"This book explains how our society is turning into a mechanical paradise, and how we're doomed."

"Mark Amerika has done it again. With this book he weaves together a new approach to a philosophical problem that plagues modern society: how authenticity and lyricism intersect to give new forms, new ideas, new cultures. It's a guide for the hypercomplex information landscape of the 21st century."

"Rigorous yet playful, this is Amerika's most ambitious and innovative work yet. It offers an intelligent reflection on human and machine creativity, and on the impossible dreams laid out by Silicon Valley's dominant narrative on AI."