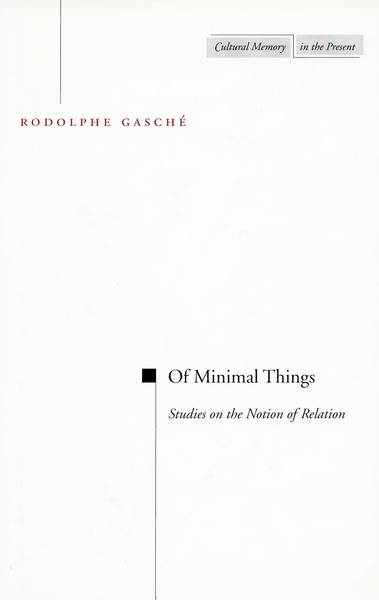 Of Minimal Things
Studies on the Notion of Relation
Rodolphe Gasché
SERIES: Cultural Memory in the Present

In the author's studies of Nietzsche and Benjamin, Husserl and Heidegger, Derrida and Blanchot, relation is shown to be central to their thought and to undergo elaborations that escape the ontological, categorial, and formalist ways in which the concept has traditionally been interpreted. Comprehending relation in terms of determination, foundation, mediatization, translation, or communication, these authors are shown to draw out and refine a host of structural implications of the notion that unseat its formalist and categorial conception.

Studying the writings of Mallarmé and Kafka, the author argues that rethought from, and in light of the other to which a relation tends, philosophy necessarily opens up to and is implicated in its others, one such possible other being literature.

Rodolphe Gasché is Eugenio Donato Professor of Comparative Literature at the State University of New York at Buffalo. He is the author, most recently, of The Wild Card of Reading: On Paul de Man.

"Of Minimal Things is masterful, learned, and never ceases to deliver maximal thought. Those seeking an intellectual challenge, and not just a performance, are urged to read it at least once."