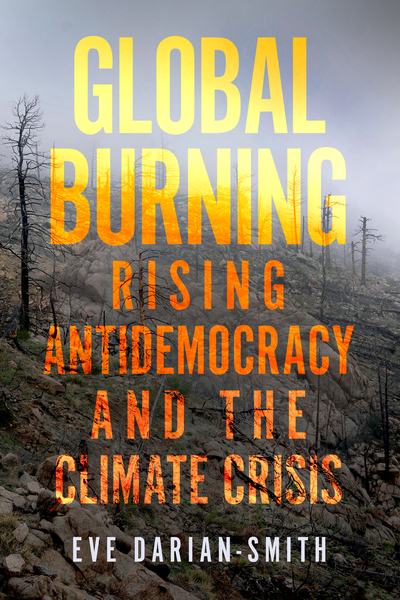 Winner of the 2022 Betty and Alfred McClung Lee Book Award, sponsored by the Association for Humanist Sociology.

How extreme-right antidemocratic governments around the world are prioritizing profits over citizens, stoking catastrophic wildfires, and accelerating global climate change.

Recent years have seen out-of-control wildfires rage across remote Brazilian rainforests, densely populated California coastlines, and major cities in Australia. What connects these separate events is more than immediate devastation and human loss of life. In Global Burning, Eve Darian-Smith contends that using fire as a symbolic and literal thread connecting different places around the world allows us to better understand the parallel, and related, trends of the growth of authoritarian politics and climate crises and their interconnected global consequences.

Darian-Smith looks deeply into each of these three cases of catastrophic wildfires and finds key similarities in all of them. As political leaders and big business work together in the pursuit of profits and power, anti-environmentalism has become an essential political tool enabling the rise of extreme right governments and energizing their populist supporters. These are the governments that deny climate science, reject environmental protection laws, and foster exclusionary worldviews that exacerbate climate injustice.

The fires in Australia, Brazil and the United States demand acknowledgment of the global systems of inequality that undergird them, connecting the political erosion of liberal democracy with the corrosion of the environment. Darian-Smith argues that these wildfires are closely linked through capitalism, colonialism, industrialization, and resource extraction. In thinking through wildfires as environmental and political phenomenon, Global Burning challenges readers to confront the interlocking powers that are ensuring our future ecological collapse.

"Global Burning is as powerful as it is succinct. Eve Darian-Smith writes with urgent clarity and conceptual richness as she grapples with some of the most pressing issues of our times. Global Burning is a very teachable book—truly interdisciplinary and international in reach."

—Rob Nixon, author of Slow Violence and the Environmentalism of the Poor

"In a daring move that combines the familiar and the unexpected, Eve Darian-Smith adds anti-environmentalism as a distinctive dimension to our understanding of the global rise of extreme far-right governments. Anti-environmentalism assumes a whole range of new meanings in this book –including willful denials of what we know will be disastrous effects."

"Global Burning is a brilliant analysis of how a range of anti-democratic trends can be viewed through the lens of catastrophic wildfires across the globe. If you want to understand how to analyze and become involved in a politics of collective resistance aimed at saving both the planet and democracy itself, this is the book to read."

—Henry Giroux, author of Race, Politics, and Pandemic Pedagogy: Education in a Time of Crisis

"As this clearly-argued book makes evident: too much of our politics has aided the forces heating our atmosphere and drying out our forests. It's time to stop."

—Bill McKibben, author Falter: Has the Human Game Begun to Play Itself Out?

"This is a book I want my students to read, this is a book my friends and family will read. Simultaneously devastating and hopeful, it repositions the significance of Indigenous ecological knowledge as a key source for worldwide wellbeing."

"The threat of extinction is real and immediate, but Eve Darian-Smith rightfully warns that it cannot be effectively thwarted unless we link the fight for environmental survival with the struggles against global, class, racial, and gender inequalities. A persuasive, solidly documented work."

—Walden Bello, co-founder of Focus on the Global South and recipient of the Right Livelihood Award

"In Global Burning, Darian-Smith attempts to assemble a big-picture puzzle from a disparate set of pieces... [B]y the end of the book attentive readers may well have seen enough to have their political views altered. Things that didn't seem to be connected before will feel linked by more than daily news coincidences."

"In Global Burning: Rising Antidemocracy and the Climate Crisis, Eve Darian-Smithconnects wildfires to the broader economic, social and political issues underlying climate change, exploring how they have become important signifiers of an unfolding global calamity. This is a timely and thought-provoking book that shows that there will be no magic solution to our current predicament until we collectively embrace a fundamental rethinking of human-nature relations and life beyond capitalism." –Dr. Sibo Chen, LSE Review of Books

"Global Burning is an accessible and deftly weaved portrayal of the dire situation humanity and all forms of life on earth are facing. It is also a book consumed without sugarcoating... Yet, Darian-Smith never resorts to fatalism. Rather, it is an urgent reality check and call to action." –Jeffrey Bachman, The Developing Economies

"Darian-Smith invites the reader to consider wildfires as the catalyst for political disruption and as the end result of parallel political movements and themes that are occurring globally."