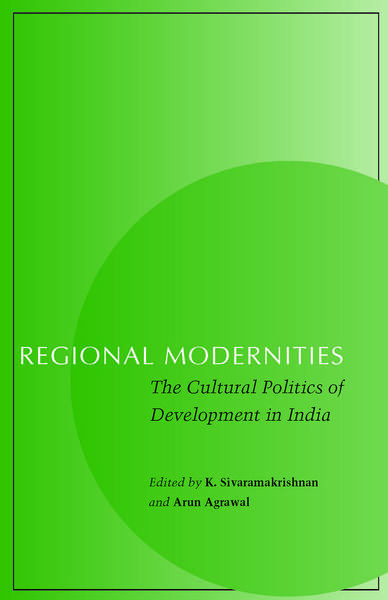 Regional Modernities
The Cultural Politics of Development in India
Edited by K. Sivaramakrishnan and Arun Agrawal

This collection of essays by leading social scientists focuses on development in India to explore the emergence of “regional modernities” in ways that are distinct from a so-called global modernity and its myriad local variations. “Regional,” for the authors, incorporates the state and other subnational and supranational social and political formations that are more or less salient depending on the social networks and development projects under consideration. In particular, the concept of region allows the assessment of large-scale ethnic, religious, social, and geo-political formations as they mediate oversimplified binary oppositions of colonial or postcolonial power and local incorporation or resistance.

Individual essays present case studies of development across India, considering the role of class, caste, gender, and ethnic and political identities in their interactions with government forces. They investigate the binding of diverse groups through large projects such as dam building and offer rich ethnographic accounts of tree farmers, entrepreneurs, government officials, women in Gandhian ashrams, slum dwellers, and atomic scientists.

"This is a well-conceived and well-executed anthropological collection of essays."

"This collection sets a very high standard of scholarship in the social science literature on development and modernity. Individually and collectively, the essays in this volume will challenge and provoke scholars engaged in the critique of development in India and elsewhere."