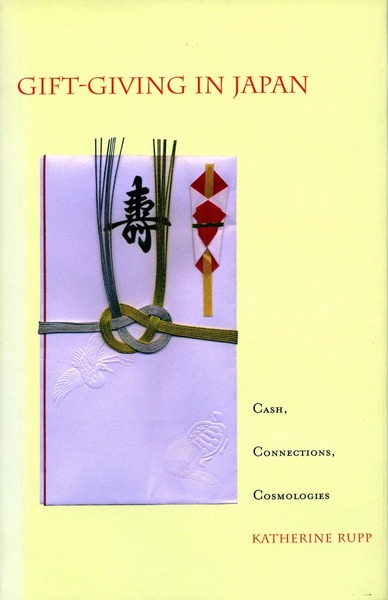 Gift-giving is extremely important in Japanese society, not only at personal and household levels, but at the national and macroeconomic levels as well. This book is the first in English to document the extraordinary scale, complexity, and variation of giving in contemporary Japan.

Gift-Giving in Japan is based on eighteen months' fieldwork in the Tokyo metropolitan area, as well as short-term research in other parts of Japan. The core of the study is the experience of family representatives of different ages, classes, genders, occupations, neighborhoods, and religions. The author also interviewed experts, including the author of gift-giving etiquette books, Buddhist and Shinto priests, department store and funeral home employees, and workers at Tokyo's Tsukiji fish market. She participated in neighborhood festivals, election rallies, house-building rites, and other ceremonies of which gift-giving was an integral part.

Recent anthropological interest in drawing a strong contrast between commodities and gifts both reflects and reinforces the conception of the gift as part of the giver and the related distinction between the realm of the gift and the realm of the marketplace. The author argues that Japanese practices of giving and receiving challenge assumptions related to this idea of the gift.

Katherine Rupp is a Research Affiliate at Yale University's Department of Anthropology.

"[The author] displays not only acute observation of the content of gift-giving but also sensitivity to ambiguities of motives on the part of both giver and receiver."

"Gift-Giving in Japan: Cash, Connections, Cosmologies is superbly written and an inspiring work which I recommend for students, researchers, and anyone interested in understanding modern Japan and its people."