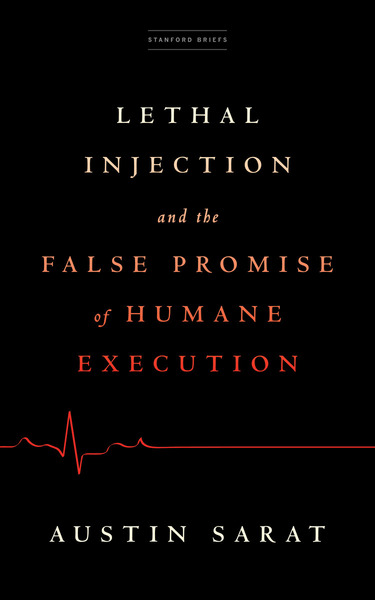 With a history marked by incompetence, political maneuvering, and secrecy, America's "most humane" execution method is anything but.

From the beginning of the Republic, this country has struggled to reconcile its use of capital punishment with the Constitution's prohibition of cruel punishment. Death penalty proponents argue both that it is justifiable as a response to particularly heinous crimes, and that it serves to deter others from committing them in the future. However, since the earliest executions, abolitionists have fought against this state-sanctioned killing, arguing, among other things, that the methods of execution have frequently been just as gruesome as the crimes meriting their use. Lethal injection was first introduced in order to quell such objections, but, as Austin Sarat shows in this brief history, its supporters' commitment to painless and humane death has never been certain.

This book tells the story of lethal injection's earliest iterations in the United States, starting with New York state's rejection of that execution method almost a century and half ago. Sarat recounts lethal injection's return in the late 1970s, and offers novel and insightful scrutiny of the new drug protocols that went into effect between 2010 and 2020. Drawing on rare data, he makes the case that lethal injections during this time only became more unreliable, inefficient, and more frequently botched. Beyond his stirring narrative history, Sarat mounts a comprehensive condemnation of the state-level maneuvering in response to such mishaps, whereby death penalty states adopted secrecy statutes and adjusted their execution protocols to make it harder to identify and observe lethal injection's flaws.

What was once touted as America's most humane execution method is now its most unreliable one. What was once a model of efficiency in the grim business of state killing is now marked by mayhem. The book concludes by critically examining the place of lethal injection, and the death penalty writ large, today.

"This book does more to unmask lethal injection's everyday cruelty than any other book that I know. Sarat writes with clarity and compassion, and anyone interested in justice would be well advised to read his words."

"Macabre and painstakingly detailed, this book puts to rest any illusions that lethal injection is clean, safe or painless. This little book doesn't let us get away with abstract debates and intellectual complacency. It lands like a gut punch."

"This enormously readable book uncovers the troubled history and failed promise of lethal injection, and is sure to help change our national conversation about capital punishment."

"Sarat vividly delineates the historical, social, legal, and ideological forces governing capital punishment and their implications and ramifications for individuals, the criminal justice system, and society. In a highly charged political era, this book is a timely education in capital punishment, executions, law, race relations, and social and legal reform—a must-read for all people interested in better understanding the application of the death penalty and those vested in positive transformation. Highly recommended."

Fifty Years Ago, the Supreme Court Tried to Reduce Racial Bias in the Death Penalty. Did It Work?

Slate
Executions by firing squad are beneath this country’s dignity

The Hill
[ More links ]
More in Law—Law and Society