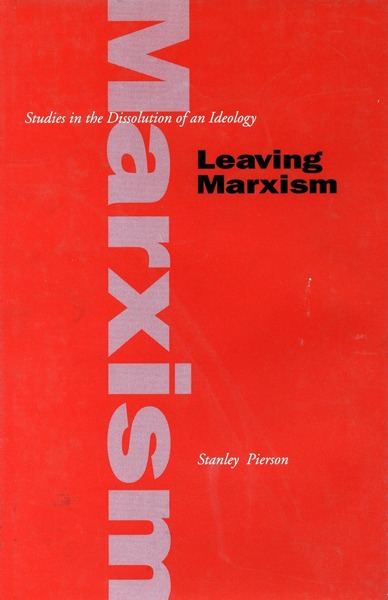 Leaving Marxism
Studies in the Dissolution of an Ideology
Stanley Pierson

The collapse of Marxism as a compelling ideology and political force is one of the most important developments in the history of twentieth-century Europe. This book seeks to understand the failure of Marxism by viewing it up close, in the experiences of three important Marxist intellectuals—the Belgian Henri De Man, the German Max Horkheimer, and the Pole Leszek Kolakowski—each of whom embraced Marxism early in life and later decisively rejected it. The author focuses on the processes through which these three figures lost their faith in Marxism, thereby providing the framework for a more general account of modern ideological disenchantment.

An introductory chapter surveys an earlier stage of that disenchantment by examining the appeal of Nietzsche and his concept of the superman to Marxist intellectuals in each of the major European socialist movements, focusing particularly on those who have lost confidence in the redemptive historical role of the proletariat. In studying the ideological trajectory of De Man, Horkheimer, and Kolakowski, the author identifies the common dilemmas they faced in their efforts to advance the Marxist cause. Those dilemmas arose in large part out of the clash between their bourgeois ethical sensibilities and the materialistic and deterministic outlook of orthodox Marxism. This clash provides a connecting link between the three generations of Marxist intellectuals dealt with in the study.

The author also discusses the aftermath of these three versions of ideological disenchantment—the attempts of each of these intellectuals to reconstruct a view of the world following the dissolution of his Marxist faith. The book concludes by placing Marxism in a broad historical context, and raises questions about its place—and that of the utopian imagination in general—within Western civilization.

Stanley Pierson is Professor of History Emeritus at the University of Oregon. He is the author, most recently, of Marxist Intellectuals and the Working Class Mentality in Germany, 1887-1912.

"Pierson provides an intelligible contribution to intellectual history, placing the careers of his subjects in the political and ideaological currents of their times."

"Thoughtful, thorough, and provocative, this book joins a growing body of scholarship that examines intellectual political engagement thrugh Marxism as a form of faith as much as a search for knowledge."