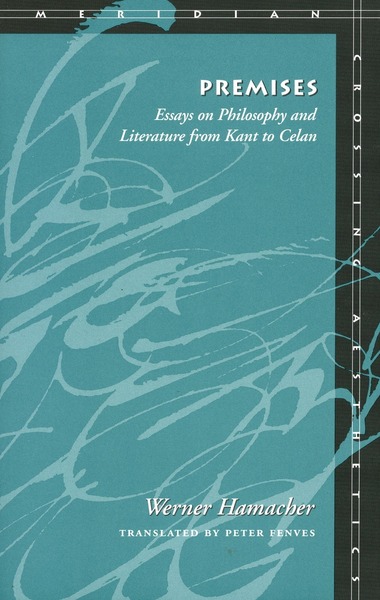 "Poetry does not impose, it exposes itself," wrote Paul Celan. Werner Hamacher's investigations into crucial texts of philosophical and literary modernity show that Celan's apothegm is also valid for the structure of understanding and for language in general. In Premises Hamacher demonstrates that the promise of a subject position is not only unavoidable—and thus operates as a structural imperative—but is also unattainable and therefore by necessity open to possibilities other than that defined as "position," to redefinitions and unexpected transformations of the merely thetical act.

Proceeding along the lines of both philosophical argument and critical reading, Hamacher presents the fullest account of the vast disruption in the theories and ethics of positional and propositional acts—a disruption first exposed by Kant's analysis of the minimal requirements for linguistic and practical action. Focusing on the double trait of every premise—that it is promised but never attained—Hamacher analyzes nine decisive themes, topics, and texts of modernity: the hermeneutic circle in Schleiermacher and Heidegger, the structure of ethical commands in Kant, Nietzsche's genealogy of moral terms and his exploration of the aporias of singularity, the irony of reading in de Man, the parabasis of positing acts in Fichte and Schlegel, Kleist's disruption of narrative representation, the gesture of naming in Benjamin and Kafka, and the incisive caesura that Paul Celan inserts into temporal and linguistic reversals. There is no book that so fully brings the issues of both critical philosophy and critical literature into reach.

"Werner Hamacher's Premises is the heir and successor to the most important theoretical and critical work done in American departments of comparative literature from the 1960s through the 1980s. Yet, Premises is no more a work of literary scholarship than one of philosophical submission to philosophy. With the gesture that is genuinely called post-structural, which is the suspicion and suspension of every code, the book's act of freedom is freedom to read and write language tout court."

"Hamacher's project can be described as the retracing of the epistemological ground upon which the modern conception of the literary was erected. It is quite clear to me that there is nothing presently available to rival this book."

Werner Hamacher, who taught for many years at the Johns Hopkins University, is Professor of General and Comparative Literature at the Goethe-Universität, Frankfurt am Main. He is the author of pleroma—Reading in Hegel (Stanford, 1998).

"Hamacher's Premises is the heir and successor to the most important theoretical and critical work done in American departments of comparative literature from the 1960s through the 1980s. . . . With the gesture that is genuinely called post-structural . . . the book's act of freedom is freedom to read and write language tout court."