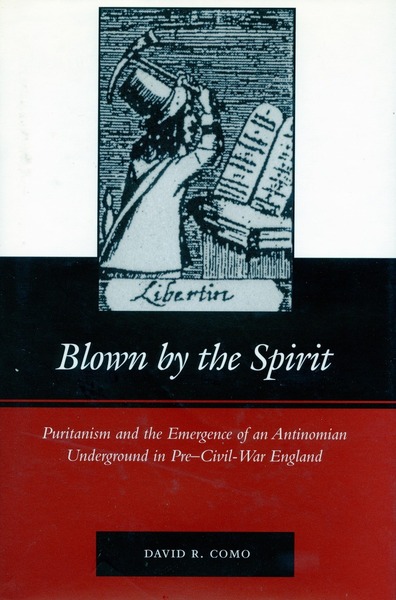 Blown by the Spirit
Puritanism and the Emergence of an Antinomian Underground in Pre-Civil-War England
David R. Como

This study explores the intersection of politics, religious thought, and religious culture in pre-revolutionary England, using hitherto unknown or overlooked manuscripts and printed material to reconstruct and contextualize a forgotten but highly significant antinomian religious subculture that evolved at the margins of the early seventeenth-century puritan community. By reconstructing this story, Blown by the Spirit offers a major revision of current understanding of Puritanism and the puritan community. In the process, the author illuminates the obscure and tangled question of the origins of civil-war radicalism, thereby helping to explain the course, consequences, and ultimate failure of the English revolution.

David R. Como is Assistant Professor in the Department of History at Stanford University.

"With enormous ingenuity, diligence and archival skill, Como provides a new and compelling explanation of the origins of sectarian radicalism."

". . . Como deserves the high praise for completing a project that some would have thought impossible."

"This is a marvelous and much-needed book: impressively researched, engaging and demanding, finely nuanced and robustly argued."

"Using antinomianism as his vehicle, he has reconstructed the complex and symbiotic relationship between radical and mainstream Puritanism and established the presence of its legacy in late-seventeenth-century England. This ambitious project is a touchstone for future work in the field of English Puritanism."

"Those who thought we knew all there was to know abot the doctrinal subtleties of the iron-souled band that turned England upside down and conquered a corner of the New World have some reading yet to do. On the required list...belongs Como's magisterial new book on the 'seething sectarian underworld' of mystics, familists, grindletonians, and other antinomans that existed in 'parasitic relationship' to mainstream Puritanism in the two decades leading up to the Civil War."

"Blown by the Spirit is a brilliantly conceived and meticulously researched exploration of what Como calls an "antinomian underground" in early Stuart England, of its dialectical relationship to mainstream Puritanism, and of that dialectic's historical influence."

"In this fascinating, deeply researched, and illuminating book, David Como takes his readers on an intellectual adventure which transforms our understanding of early Stuart puritanism."

"Como has mounted a strong and important argument that deserves to be widely known."