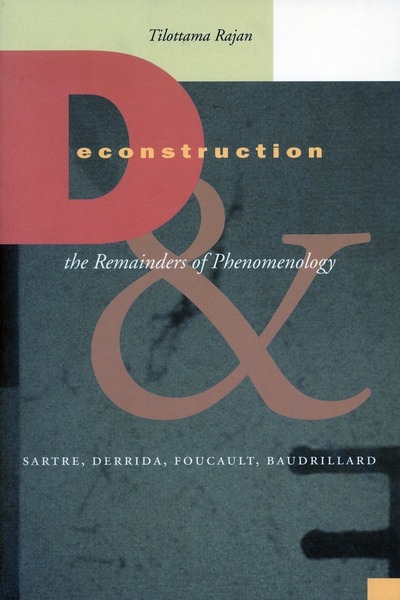 This book disentangles two terms that were conflated in the initial Anglo-American appropriation of French theory: deconstruction and poststructuralism. Focusing on Sartre, Derrida, Foucault, and Baudrillard (but also considering Levinas, Blanchot, de Man, and others), it traces the turn from a deconstruction inflected by phenomenology to a poststructuralism formed by the rejection of models based on consciousness in favor of ones based on language and structure. The book provides a wide-ranging and complex genealogy of French theory from the 1940s onward, placing particular emphasis on the largely neglected early work of the theorists involved and on deconstruction's continuing relevance.

The author argues that deconstruction is a form of radical, antiscientific modernity: an interdisciplinary reconfiguration of philosophy as it confronted the positivism of the human sciences in the 1960s. By contrast, poststructuralism is a type of postmodern theory inflected by changes in technology and the mode of information. Inasmuch as poststructuralism is founded upon its "constitutive loss" of phenomenology (in Judith Butler's phrase), the author is also concerned with the ways phenomenology (particularly Sartre's forgotten but seminal Being and Nothingness) is remembered, repeated in different ways, and never quite worked through in its theoretical successors. Thus the book also exemplifies a way of reading intellectual history that is not only concerned with the transmission of concepts, but also with the processes of transference, mourning, and disavowal that inform the relationships between bodies of thought.

Tilottama Rajan is Canada Research Chair in English and Theory at the University of Western Ontario. She is the author of The Supplement of Reading: Figures of Understanding in Romantic Theory and Practice and the co-editor of After Poststructuralism: Writing the Intellectual History of Theory.

"This is a superbly strong work that will generate much discussion. There are no comparable books that have undertaken such a rereading of the development of French theory and its emergence in response to phenomenology. Most other studies tend to focus on just deconstruction or Derrida, and many of these are already dated. None have the extensive coverage and knowledge of the French intellectual scene exhibited here."

"This book is a carefully crafted and extremely erudite study of the forgotten connections between existential phenomenology and French deconstruction....it represents a major contribution to our understanding of twentieth-century French intellectual history, and holds many rewards for readers possessing a prior knowledge of the subject."