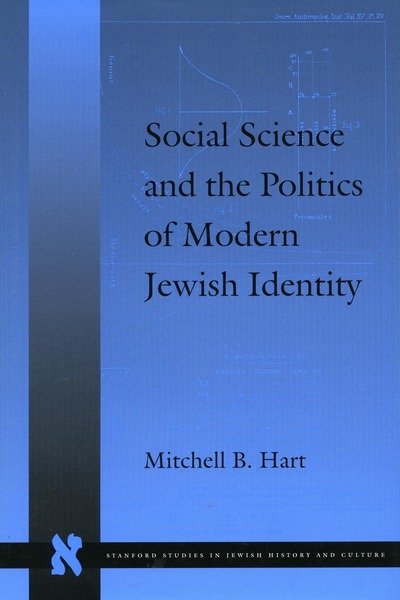 Social Science and the Politics of Modern Jewish Identity
Mitchell B. Hart
SERIES: Stanford Studies in Jewish History and Culture

Finalist for the 2000-2001 Annual Koret Jewish Book Award, History Category, sponsored by The Koret Foundation and the National Foundation for Jewish Culture.

Winner of the 2001 Salo Wittmayer Baron Book Prize, sponsored by the American Academy for Jewish Research.

Why did the social sciences become an integral part of Jewish scholarship beginning in the late nineteenth century? What part did this new scholarship play in the ongoing debate over emancipation and assimilation, Zionism and diasporism, the nature of Jewish identity, and the problem of Jewish continuity and survival. To answer these questions, this book traces the emergence and development of an organized Jewish social science in central Europe, and explores the increasing importance of statistics and other social science modes of analysis for Jewish elites throughout Europe and in the United States.

The author locates the initial impetus for an organized, institutionalized Jewish social science in the Zionist movement, as Zionists looked to the social sciences to provide them with the knowledge of contemporary Jewish life deemed necessary for nationalist revival. In particular, the social sciences offered empirical evidence of the ambiguous condition of Jewry in the diaspora. Social science also charted emancipation and assimilation, which were viewed as disintegrative agents for the dissolution of Jewish identity, and hence as a threat to the Jewish future. For Zionists, nationalism offered the means to reverse the process of dissolution. Yet Zionists were not alone in turning to the social sciences to advance their political agenda. This study also examines the involvement of non-Zionists in Jewish social science, focusing on the way liberal, assimilationist scholars utilized social science data to demonstrate the continuing viability of Jewish life in the diaspora.

Jewish social science grew out of a sustained effort to understand and explain the effects of modernization on Jewry. Above all, Jewish scholars sought to give the enormous transformations undergone by Jewry in the nineteenth century a larger meaning and significance.

Mitchell B. Hart is Assistant Professor of Modern Jewish and European History at Florida International University.

"Hart has made a significant contribution to European Jewish history, to the social scientific study of Jews, and to the intellectual history of the social sciences in his innovative study of the politics of modern Jewish identity within the newly developed field of Jewish social sciences."

"Considering the technical nature of many of the sources, Hart's book is quite readable and in many ways, exciting." Relgious Studies Review

"Hart's work provides both a critical contribution to understanding the Jewish social scientific debate as it was framed during its formative decades, and an essential context for the present debates."