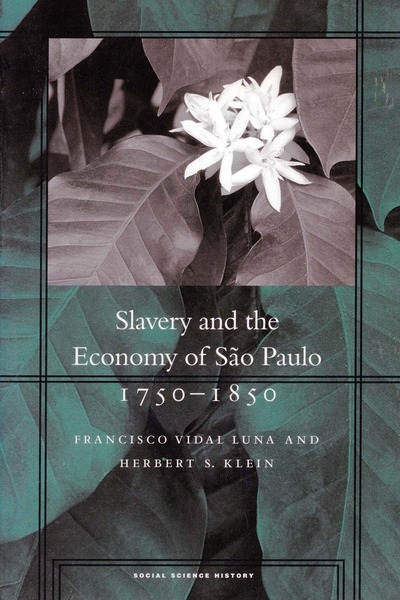 Today the Brazilian state of São Paulo is one of the world’s most advanced agricultural, industrial, and urbanized regions. Its historical evolution, however, is poorly understood. Most scholarly attention has been paid to the period after 1850, when coffee rose to economic dominance, or to the period since 1880, when large-scale European immigration turned the city of São Paulo into one of the largest metropolises in the world.

This book thus provides the first comprehensive portrait of the economy and people of São Paulo during the critical transition from the traditional eighteenth-century colonial world to the modernizing world of the nineteenth century.

The result is a major rethinking of the history of early slavery in Brazil—it shows that, contrary to previous beliefs, slavery was as deeply entrenched and exploited in São Paulo as elsewhere in Brazil, and that the state’s early economic growth (as the world’s leading coffee-producing region after 1850) was made possible by an expanding African slave labor force. This raises many questions about São Paulo’s supposed “exceptionalism” and challenges the standard account of the state’s economic history, which has been strongly shaped by ideas of path dependence.

In addition to studying the slave-owning class, the authors investigate the economic role of free whites and colored who did not own slaves, and compare São Paulo’s slave society and economy with other such regions in the Americas.

Francisco Vidal Luna is Professor of Economics at the Universidade de São Paulo. He is the author of several books on the Brazilian economy and economic history. Herbert S. Klein is Professor of Latin American History at Columbia University. Among his many books are Haciendas and Ayllus: Rural Society in the Bolivian Andes in the Eighteenth and Nineteenth Centuries (Stanford, 1993) and, most recently, The Atlantic Slave Trade.

"[T]his excellent book deserves the careful consideration not only of scholars of slavery and Brazilian economic history, but students of the wider Atlantic World as well."

"There is not one thing wrong with this book. Luna and Klein have done impressive research in previously unused sources. They present their findings in clear, unpretentious prose....All in all, Slavery and the Economy of São Paulo is a model monograph, nothing less than we have come to expect from its distinguished authors."EH.Net