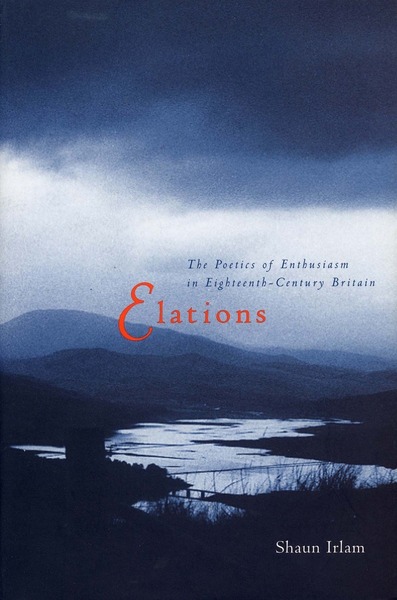 Elations
The Poetics of Enthusiasm in Eighteenth-Century Britain
Shaun Irlam

Elations rewrites the history of early-eighteenth-century English literature around the politics and poetics of "Enthusiasm." It examines the aesthetic theory of the period and reassesses the poetry of two poets seldom read today but very popular in their time: James Thomson and Edward Young. The book also explores the genesis and construction of moral authority through a variety of competing discourses appropriated by poetry, and it traces the rehabilitation of languages of sentiment and Enthusiasm between the English Civil War and the American Revolution.

Today, most readers still associate poetry with the expression of emotion; indeed, Wordsworth's phrase "spontaneous overflow of powerful feeling" resounds in contemporary conceptions of poetry. But the position of sentiment in poetry was not always so secure, as attested by the largely forgotten intellectual struggles that produced Romanticism. To understand the etymology of sentiment in eighteenth-century English poetry, the author argues, we must begin by studying religious enthusiasm in the seventeenth century.

The literary fortunes of Enthusiasm provide a central clue to the changing terms in which moral subjectivity and political agency were fashioned during that period. Enthusiasm was consistently associated with religious fanaticism and was the butt of much satire and ridicule. Early in the eighteenth century, however, its definition became more unstable and complex. Elations traces the evolution and differentiation of a poetic enthusiasm from religious enthusiasm as the feeling modulated into a discourse in which poets confronted the limits of form and experimented with new modes of subjectivity. This rehabilitated enthusiasm is exemplified in detailed new readings of Thomson's The Seasons and Young's Night-Thoughts.

Experiments with affect entailed the unmaking and remaking of poetic vocabularies. The overhauling of poetic discourse coincided with the refurbishing of affective and moral subjects. In an era without the concept of the unconscious, Enthusiasm provided a framework within which self-estrangement could be conceived and managed, and it regulated the synthesis of the moral subject. Interludes of elation effected an alienation of self from world that claimed to usher in an authoritative hermeneutic and moral subjectivity. The recovery of a discourse of Enthusiasm in eighteenth-century poetry and aesthetics became a means of reformulating the affective and nonrationalistic bases of a moral subjectivity that was regarded as a necessary foundation for any kind of civil society.

Shaun Irlam is Assistant Professor of Comparative Literature at the State University of New York at Buffalo.

"Irlam's readings are deft and judicious, and this study makes a large and . . . brilliant contribution to the field."

—Journal of English and Germanic Philology

"Like Derrida and Paul de Man, what Irlam does is not "scholarship," but textual reading yoked to a priori metaphysical argument. . . . Irlam's readings [of Young's Conjectures on Original Composition], and in his chapters on Thomson, make Elations a book worth inspecting."

"Irlam brings an imaginative historical perpective to bear on his subjects, contextualizing their achievement through detailed examination of contemporaneous critical and philosophic discourse. . . . The reading of Thomson supported by the preliminary history of enthusiasm is thorough, imaginative, and innovative."