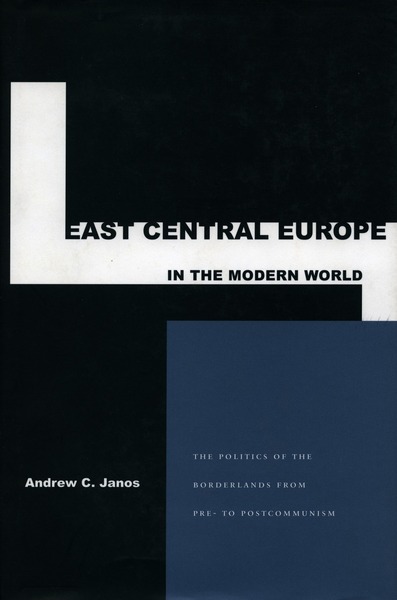 East Central Europe in the Modern World
The Politics of the Borderlands from Pre- to Postcommunism
Andrew C. Janos

Combining engaging narrative with analytic power, this book presents the past and present of East Central Europe in the larger context of the political and economic history of the Continent.

The central theme of the book is best summarized by the familiar French proverb that the more things change the more they are the same. For while the historical experience of East Central Europe in the modern world may be described as one of endemic political change—from Western liberalism to corrupted parliamentarism, from fascism to state socialism imposed by the Soviet Union, and now to a fledgling new liberalism under Western auspices—all these political systems faced the same stubborn facts of life: the region’s economic backwardness vis-à-vis the West, the debilities of small nationhood, and the cultural divide between the lands of eastern and western Christianity.

In dealing with this volatile mix of continuity and change, this book provides a new interpretation of the politics of the region in the modern period. At the same time, it also contributes to the ongoing dialogue among disciplines by attempting to strike a better balance between cultural and economic explanations of conflict, between structural and institutional approaches to politics, and, above all, between intra- and extra-societal forces that shape power and politics in national states.

For the purposes of this book, East Central Europe is defined as the territory of the historical precursors, and contemporary successors, of the eight lesser member states of the former Soviet Bloc.

Andrew C. Janos is Professor of Political Science at the University of California, Berkeley.

"[East Central Europe in the Modern World] will not just fascinate the expert but also greatly inform those seeking a more introductory account of the borderlands once again subject to such extensive change."

"This book is the culmination of a lifetime of academic research and thinking by one of the most prominent scholars of East Central European politics. Janos employs an exhaustive historical survey of the region (including present-day Albania, Serbia-Montenegro, Macedonia, Slovenia, Croatia, Bosnia-Herzegovina, Bulgaria, Romania, Hungary, the Czech Republic, Slovakia, Poland, and the former German Democratic Republic) to develop a grand theory of political and economic development of the countries on Europe's periphery. Ambitious in scope and engagingly argued, Janos's book is well worth reading by any serious student of East European or postcommunist politics."

"Andrew Janos, ever the astute observer of Europe's eastern flank, has done us all a great service by writing a thorough, highly readable, and yet provocative history of the political and economic evolution of east central Europe over the past two hundred years."

"This work constitutes a provocative introduction to the politics and economics of east central Europe, and its interdisciplinary character should make it of interest to a wide audience of political scientists, historians, and economists."

"This book is the culmination of a lifetime of academic research and thinking by one of the most prominent scholars of East Central Europe. . . . Ambitious in scope and engagingly argued, Janos's book is well worth reading by any serious student of East European or postcommunist politics."