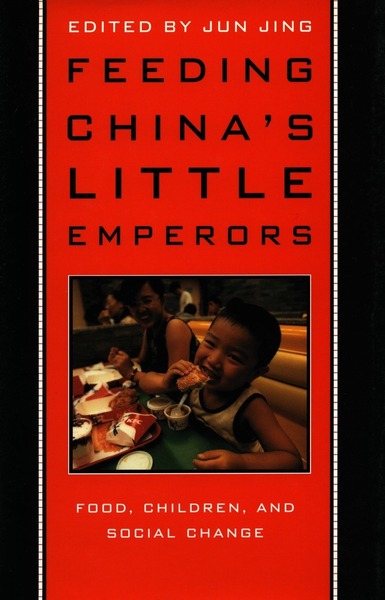 Until recently, Chinese children ate what their parents fed them and were not permitted to influence, much less dictate, their own diet. The situation today is radically different, especially in cities and prosperous villages, as a result of a notable increase in people’s income and a fast-growing consumer culture. Chinese children, with spending money in their pockets, arguably have become the most determined consumers—usually of snack foods, soft drinks, and fast foods from such Western outlets as McDonald’s and Kentucky Fried Chicken. With many children, especially pampered only children, now controlling not only their own but also their family’s choice of staples, snacks, and restaurants, a major reformation in the concept of childhood is occurring in China.

This book focuses on how the transformation of children’s food habits, the result of China’s transition to a market economy and its integration into the global economic arena, has changed the intimate relationship of childhood, parenthood, and family life. Since the early 1980s, a drastic decline in fertility and a steady rise in family income have been accompanied by a profusion of new products successfully advertised on television and in other media as “children’s food.” This commercialization of children’s diet has become so pervasive that even children in remote villages surprise their parents with demands for particular trendy foods and soft drinks. Many Chinese parents, reared very differently, anxiously question whether their children are eating well and growing up healthy.

The contributors to this book, drawn from the fields of anthropology, sociology, political economy, and nutrition, examine a wide variety of topics: the effects of new foods on children’s health; the consumption of “prestige” foods; the social implications of commercialized children’s food on a Chinese Islamic community; the adaptations of Kentucky Fried Chicken in response to indigenous fast-food companies; the generation gap in attitudes toward food consumption; the significance of religion and nutrition in feeding and healing children; the creation of baby-friendly hospitals to promote breastfeeding and scientific childcare methods; the special role of nationalism and traditional Chinese medicine in children’s food production; and the business promotion of having fun as an aspect of eating well.

Jun Jing is Assistant Professor of Social Anthropology at the City University of New York. He is the author of The Temple of Memories: History, Power, and Morality in a Chinese Village (Stanford, 1996).

"Jun Jing's edited volume is an important step forward on a controversial subject—only children in China's one-child families—that has often generated more heat than light. . . . There are no weak chapters. . . . [James L.] Watson is correct in concluding that the book may be unique because it attempts to track a profound historical transformation in social attitudes toward children during the early stages of that transformation."

"A rich description of cultural and dietary change in action, pointing to possibilities in research as well as the future of health studies in China."