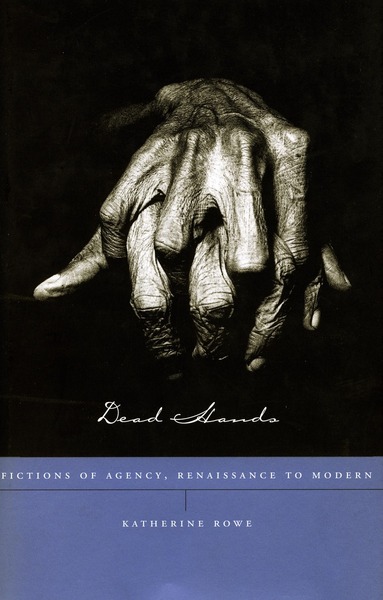 Dead Hands traces the fascinating career of a curious imaginative device: the wandering, disembodied, or ghostly hand. The author situates this familiar gothic convention in its richer literary and intellectual contexts, from early modern English drama through American fiction. Dexterously threading historical, theoretical, and formalist questions through readings of the plays of Shakespeare and Webster and the haunted tales of Maupassant, Le Fanu, and Twain, the book illuminates the complex social fictions invested in the faculties of the hand and tested by this evocative device.

The book brings together a broad and eclectic array of "manual" iconography: from sixteenth-century religious imagery, medical anatomies, emblem books, witchcraft and folklore, to the popular metaphors of nineteenth-century industrialism, contemporary labor movements, and forensic science. Literary "dead hands" draw on and elaborate these varied traditions, to sometimes humorous and sometimes chilling effect.

Across such disparate fields, the author argues, the figure of the "dead hand" represents a specific set of ideas about human agency: particularly, concerns about the fraught relationship between intentions (individual and collective) and meaningful action in the world. Severed and wandering, fictional dead hands challenge prevailing assumptions about bodily autonomy and control, directing us instead to the dependent, disabling, and self-alienating experiences of the acting self. In the process, they illuminate the changing assumptions about bodily experience—that "sense" of acting self—that sustain legal and political definitions of person in these different periods.

Outlining the dynamic history of this device—first as it migrates from visual art onto the Elizabethan and Jacobean stage, and later as it prospers in Anglo-American gothic fiction—Dead Hands advances a comparatist reading of early modern and modern concepts of bodily action and its relation to interiority, authority, and identity.

"A series of richly historicized readings which highlight multiplicity, complexity, and ironic self-questioning rather than adherence to a uniform and culturally determined version of the self."