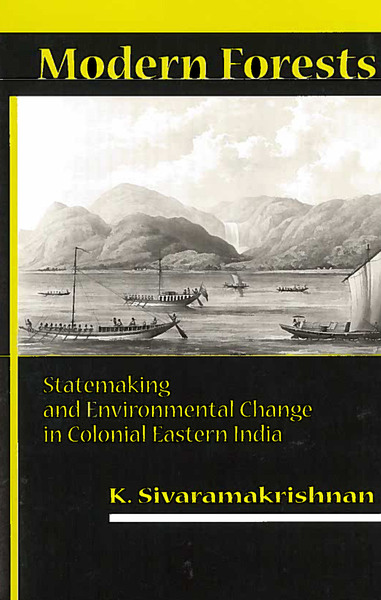 Modern Forests is an environmental, institutional, and cultural history of forestry in colonial eastern India. By carefully examining the influence of regional political formations and biogeographic processes on land and forest management, this book offers an analysis of the interrelated social and biophysical factors that influenced landscape change. Through a cultural analysis of powerful landscape representations, Modern Forests reveals the contention, debates, and uncertainty that persisted for two hundred years of colonial rule as forests were identified, classified, and brought under different regimes of control and were transformed to serve a variety of imperial and local interests.

The author examines the regionally varied conditions that generated widely different kinds of forest management systems, and the ways in which certain ideas and forces became dominant at various times. Through this emphasis on regional socio-political processes and ecologies, the author offers a new way to write environmental history. Instead of making a sharp distinction between third-world and first-world experiences in forest management, the book suggests a potential for cross-continental comparative studies through regional analyses.

The book also offers an approach to historical anthropology that does not make apolitical separations between foreign and indigenous views of the world of nature, insisting instead that different cultural repertoires for discerning the natural, and using it, can be fashioned out of shared concerns within and across social groups. The politics of such cultural construction, the book argues, must be studied through institutional histories and ethnographies of statemaking. In conclusion, the author offers a genealogy of development as it can be traced from forest conservation in colonial eastern India.

K. Sivaramakrishnan is Assistant Professor of Anthropology at the University of Washington.

"Among the dozen or so full-length studies [about India's forests] that have been published, this one stands out for the clarity of the argument and lucidity of style. . . . This is a book that sets standards that will be hard to equal, let alone surpass. It is a must for anyone interested in going beyond the superficial in knowing about the past and future of [India's] forests."

" . . . Modern Forests comes as a pleasant addition to a tradition of path-breaking works that combine disciplines and transcend artificial boundaries to look at the real world. Indeed, the book is astonishing as much for its academic analysis as for the breadth of the canvas. . . . [It] is a captivating story of the emergence of regimes of governance in Bengal over 200 years of colonial rule"

"This is an outstanding book. Ostensibly dealing with the making and enforcing of forest conservation policy in Bengal, it ranges expertly across a vast terrain of European intellectual history, South Asian cultural anthropology, and colonial and postcolonial theory. It enlightens—in the proper sense—both through its grasp of historical detail and its comprehension of complex arguments."

"Quietly, but definitively, [Sivaramakrishnan] devastates a bent of postcolonial theorizing that assumes the colonial context to have been marked by a neat binary opposition between Western modernity and indigenous traditionalism."

"[Sivaramakrishnan] valuably reminds us that history consists, perhaps even more, of what people actually did than what they said."

"What emerges from [Sivaramakrishnan's] study has importance much beyond the realm of forest history. Inter alia, he produces a vivid portrait of British colonialism at work in India in the nineteenth and early twentieth centuries."

"Using a rich blend of anthropology and social theory, Professor Sivaramakrishnan traces the complex webs of social hierarchy as well as political conflict on the land, which shaped a forest frontier region of Bengal. The author's full command of his subject for the pre-colonial period enables him to make firm assessments about the transformation of land and society under European rule."

"The elegance and depth of [Sivaramakrishnan's] presentation makes Modern Forests an outstanding contribution to our discussion of the colonial past's formative influence on today's dilemmas."