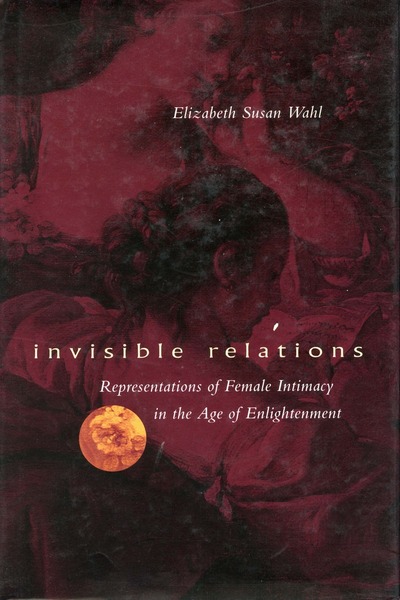 This book explores the ambivalent and often contradictory ways in which English and French writers of the seventeenth and eighteenth centuries represented relations of intimacy between women. These representations included both a sexualized model of the “lesbian” tribade and an “idealized” model that portrayed female friendship as devoid of sexual expression. Although these two perceptions of female intimacy may seem mutually exclusive, the author argues that both operate as defining parameters, not only for literary representations of relations between women but also for cultural responses to those institutions in which women could gather—salon, convent, theater, or brothel.

Despite increasing evidence of female homosocial and homosexual bonds during this period, representations of female intimacy have remained largely invisible within critical discourse. They are overshadowed either by a dominant heterosexual understanding of such institutions as marriage or prostitution or by historical patterns of male homosexual behavior, to which they often do not correspond. By broadening the concept of intimacy to include relations between women that may evade or subvert the boundaries of “compulsory” heterosexuality, the author argues, one can locate a duality of “polite” and eroticized models of female intimacy in the cultural discourses of both France and England.

Analyzing a variety of legal, medical, and historical materials, as well as literary texts—by Aphra Behn, Katherine Philips, Madeleine de Scudéry, Catherine Descartes, Delarivier Manley, and John Cleland—the author outlines a combination of cultural and historical circumstances that contributed to or were symptomatic of increasing consciousness and concern about female homosexuality in England and France. Relating this sexualized model of female intimacy to idealized images of female friendship in mainstream literary texts allows the author to recover an incipient discourse of female homosexuality. She also delineates cultural fantasies about the outcome of unregulated contact between women, as well as underlying fears that such intimacy could foster aberrant social and political behavior in addition to unauthorized sexual relations between women.

" Invisible Relations breaks important new ground in the study . . . of female intimacy and homoeroticism. . . . An insightful, intelligent book that will challenge how scholars have traditionally perceived female intimacy and female communities in the Enlightenment."

"A work of impressive scholarship. . . . of solid value in presenting new material to scholars of the history of sexuality and in cultural studies. Written in a precise yet accessible style, the book is a pleasure to read."

"The work's merits . . . .lie in its meticulous research, judicious criticism and lucid analysis. This is a worthy contribution to the history of female-female relations."