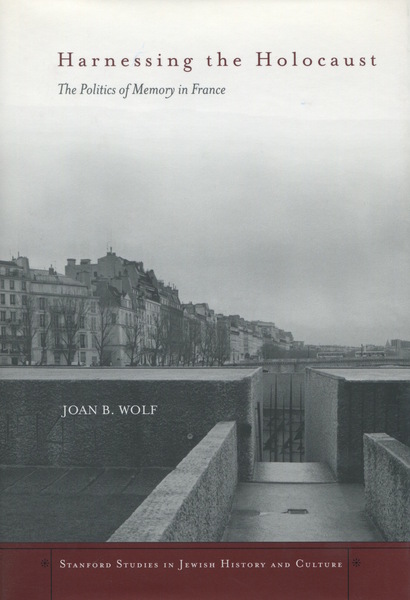 Harnessing the Holocaust
The Politics of Memory in France
Joan B. Wolf
SERIES: Stanford Studies in Jewish History and Culture

Harnessing the Holocaust presents the compelling story of how the Nazi genocide of the Jews became an almost daily source of controversy in French politics. Joan Wolf argues that from the Six-Day War through the trial of Maurice Papon in 1997-98, the Holocaust developed from a Jewish trauma into a metaphor for oppression and a symbol of victimization on a wide scale.

Using scholarship from a range of disciplines, Harnessing the Holocaust argues that the roots of Holocaust politics reside in the unresolved dilemmas of Jewish emancipation and the tensions inherent in the revolutionary notion of universalism. Ultimately, the book suggests, the Holocaust became a screen for debates about what it means to be French.

"This subtle, scholarly, discerning book is more than a study of "the politics of the Holocaust" in post-World War II France; it is also an examination of how a series of events, starting with the Six-Day War in 1967, led to drastic changes in the relationship between French Jews and the French Republic."

"[T]he book's strengths are manifold. Not only does Wolf thoroughly explain the Holocaust's emergence as a significant theme in French public life, but she also expertly shows the ways in which Jews and non-Jews interpreted the past differently, leading to misunderstandings between them."

"Wolf's book is a fascinating and subtle study....Its value cannot be underestimated..."

"Indispensable reading for those wishing to understand Jewish attitudes and post-war politics in France, this work offers a richly detailed presentation of a thirty-year discourse on the Holocaust."

"Wolf has written a fine study of memory, ethnicity, and assimilation in postwar France. She makes a valuable contribution not only to recent French history but also to Holocaust studies and the history of memory."