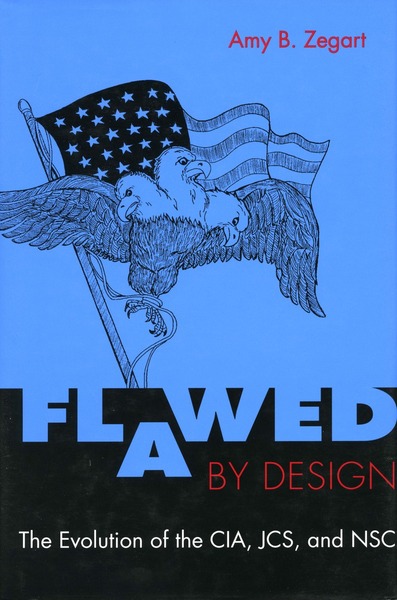 Flawed by Design
The Evolution of the CIA, JCS, and NSC
Amy B. Zegart

In this provocative and thoughtful book, Amy Zegart challenges the conventional belief that national security agencies work reasonably well to serve the national interest as they were designed to do. Using a new institutionalist approach, Zegart asks what forces shaped the initial design of the Central Intelligence Agency, the Joint Chiefs of Staff, and the National Security Council in ways that meant they were handicapped from birth.

Ironically, she finds that much of the blame can be ascribed to cherished features of American democracy—frequent elections, the separation of powers, majority rule, political compromise—all of which constrain presidential power and give Congress little incentive to create an effective foreign policy system. At the same time, bureaucrats in rival departments had the expertise, the staying power, and the incentives to sabotage the creation of effective competitors, and this is exactly what they did.

Historical evidence suggests that most political players did not consider broad national concerns when they forged the CIA, JCS, and NSC in the late 1940s. Although President Truman aimed to establish a functional foreign policy system, he was stymied by self-interested bureaucrats, legislators, and military leaders. The NSC was established by accident, as a byproduct of political compromise; Navy opposition crippled the JCS from the outset; and the CIA emerged without the statutory authority to fulfill its assigned role thanks to the Navy, War, State, and Justice departments, which fought to protect their own intelligence apparatus.

Not surprisingly, the new security agencies performed poorly as they struggled to overcome their crippled evolution. Only the NSC overcame its initial handicaps as several presidents exploited loopholes in the National Security Act of 1947 to reinvent the NSC staff. The JCS, by contrast, remained mired in its ineffective design for nearly forty years—i.e., throughout the Cold War—and the CIA’s pivotal analysis branch has never recovered from its origins. In sum, the author paints an astonishing picture: the agencies Americans count on most to protect them from enemies abroad are, by design, largely incapable of doing so.

Amy B. Zegart is Assistant Professor of Policy Studies in the School of Public Policy and Social Research at the University of California, Los Angeles.

"Based on voluminous historical materials, this book is a must-read for all serious students of the American foreign policy process."

"Zegart's incisive and revealing new book . . . convincingly argues that U.S. interests have been compromised . . . by the institutional design of national security agencies."

"Fifty years afer the creation fo the national securty decision making mechanisms, Zegart's anaysis is both historically timely and intellectually insightful. Her assessments should be seriously considered in any systematic efforts to update and reform the existing arrangements."