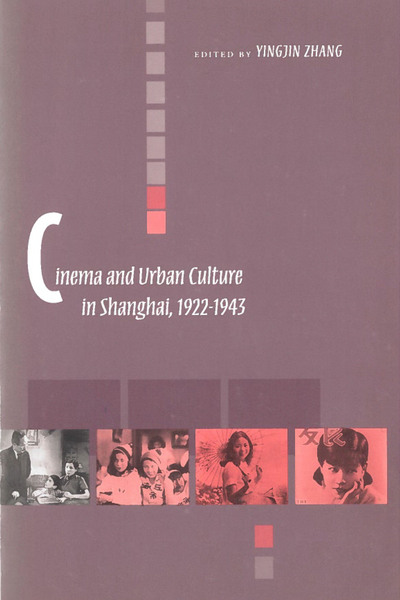 Cinema and Urban Culture in Shanghai, 1922-1943
Edited by Yingjin Zhang

This volume aims both to establish cinema as a vital force in Shanghai culture and to direct attention to early Chinese cinema, a crucial chapter in Chinese cultural history long neglected by Western scholars.

The editor’s introduction surveys the history and historiography of Chinese cinema through the 1940’s and identifies subjects and sources that await further research. In Part I, “Screening Romance,” Zhen Zhang discusses how the influence of teahouse culture gradually yielded to cinematic and narrative concerns in the early 1920’s. Kristine Harris’s analysis of a costume drama reveals the director’s cultural heritage and a rich psychological subtext created by new film techniques. Leo Ou-fan Lee examines the ways various urban institutions were utilized to promote a certain type of film culture in Shanghai.

In Part II, “Imaging Sexuality,” Andrew Field traces the public perception of cabaret girls in Shanghai, and Michael Chang studies the discursive processes by which three generations of early movie stars were elevated to stardom. Yingjin Zhang contends that prostitution was a focal point in the urban imagination and that its public presentation furnished Chinese filmmakers with a highly contested space for projecting different ideologies.

Representing the disciplines of film, literature, and ethnomusicology, the contributors seek to redefine concepts of cinema and urban culture in Chinese historiography. The volume will appeal to scholars whose interests lie, not just in film studies and Chinese history, but in the fields of modernity, urban studies, and popular culture.

"This landmark volume on early Chinese cinema is testament to the burgeoning of high-quality American-based research on Chinese cinema in general . . . .A substantial contribution to scholarship both on Chinese cinema and Republican China . . . .The achievements of the essays are threefold. They produce new empirical knowledge about areas hitherto neglected. They correct existing misapprehensions. And they open up important debates for further consideration."