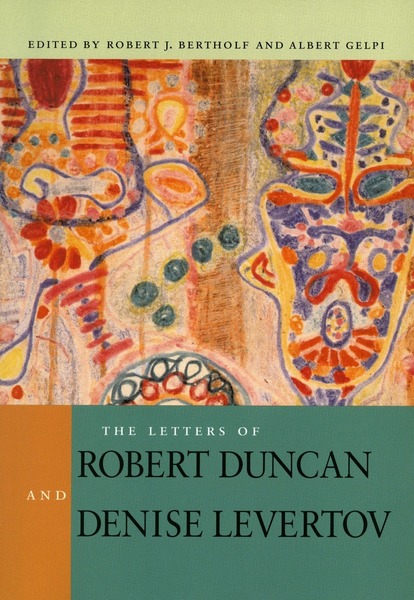 The Letters of Robert Duncan and Denise Levertov
Edited by Robert J. Bertholf and Albert Gelpi

Winner of the 2004 Morton N. Cohen Award for a Distinguished Edition of Letters, sponsored by the Modern Language Association.

This volume presents the complete correspondence between two of the most important and influential American poets of the postwar period. The almost 500 letters range widely over the poetry scene and the issues that made the period so lively and productive. But what gives the exchange its special personal and literary resonance is the sense of spiritual affinity and shared conviction about the power of the visionary imagination. Duncan and Levertov explore these matters in rich detail until, under the stress of dealing with the Vietnam War in poetry, they discover deep-seated differences in the religious and ethical convictions underlying their politics and poetic stance. The issues that drew them together and those that drove them apart create a powerful personal drama with far-reaching historical and cultural significance. The editors have provided a critical Introduction, full notes, a chronology, and a glossary of names.

"This collection represents the most important and complete interchange between two poets in the latter half of the century, and offers essential insight into the aesthetics of Black Mountain, open-field, Projectivist, and Objectivist poetry—but also elucidates the blend of mystical and personal which makes their work so entrancing . . . I found this book one of the most exciting interchanges of ideas in letter that I have ever read. Albert Gelpi's introduction thoroughly extends appreciation for Levertov and Duncan's relationship, and provides illuminating insight into the causes of the rift between them. Such a massive collection demands good appendices, and the editors successfully provide contextual notes, a glossary, a chronology, and biographical information about the people mentioned in the letters."

"The affectionate, chatty, honest, lengthy, detailed comments in the correspondence give an insight into two souls for whom words were life...This corresondence is invaluable to those interested in the language of poetry, indeed of all writing."

"The correspondance, now presented to us in a monumental edition produced by Albert Gelpi and Robert J. Bertholf, with a judicious introduction by Gelpi and useful appendix, glossary of names, chronology and notes, is an indispensable addition to our understanding of American poetry in the post-war decades. Even readers who have reservations about the work of both poets will find these letters riveting."

"The intimacy, loyalty, and lively intellectual exchange captured in this correspondence reveal the intense bond between Duncan and Levertov and depict the state of American poetry and cultural history in the mid-twentieth century."

"No good poetry can be written to order, regardless of how worthy or pressing the cause. Duncan's and Levertov's letters are an invaluable historical document on how difficult it is to respond to such questions while innocent blood is being spilled. They seem to me even more eloquent and relevant today as we find ourselves living through another senseless war."

"The reader who holds The Letters in his hands holds the actual friendship . . . and accordingly is offered a rare chance to understand where two old friends went wrong. Spanning some thirty years . . . the collection manages what would seem unlikely in material so sprawling: to tell a coherent story."

"This splendid edition fulfills every wish."