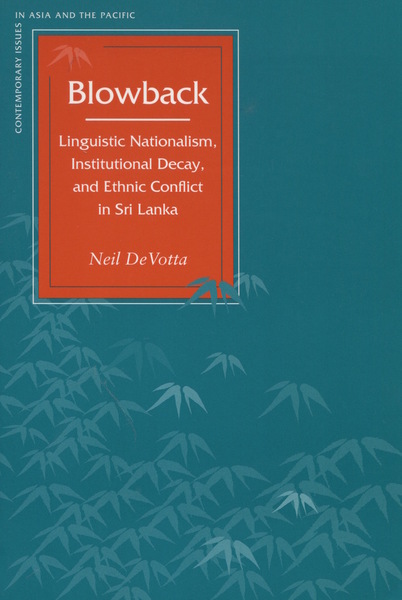 In the mid-1950s, Sri Lanka’s majority Sinhalese politicians began outbidding one another on who could provide the greatest advantages for their community, using the Sinhala language as their instrument. The appeal to Sinhalese linguistic nationalism precipitated a situation in which the movement to replace English as the country’s official language with Sinhala and Tamil (the language of Sri Lanka’s principal minority) was abandoned and Sinhala alone became the official language in 1956. The Tamils’ subsequent protests led to anti-Tamil riots and institutional decay, which meant that supposedly representative agencies of government catered to Sinhalese preferences and blatantly disregarded minority interests. This in turn led to the Tamils’ mobilizing, first politically then militarily, and by the mid-1970s Tamil youth were bent on creating a separate state.

"DeVotta has submitted an elaborate, interesting, theory-led study of the Sri Lankan conflict. Focusing on the language politics, he allude to a highly sensitive topic in the history of Tamil-Sinhalese ethnic relations. In addition, the extensive quotations enable the reader to comprehend the political view of the Sinhala and Tamil elites at that time."

"DeVotta's detailed historical approach makes the book a fine case study for social scientists in general and for anyone with a serious interest in ethnic conflict in South Asia."

"The resounding strength of DeVotta's book is that it provides a truly nuanced understanding of the productive ideological linking of language to collective notions of peoplehood within the postcolonial state. His book richly illustrates the ways that language ideologies are created, linked to competing versions of national identity, and intimately embedded in institutionalized positions of power."

"Neil DeVotta's devastating indictment of Sinhala linguistic nationalism offers a well-researched historical narrative and theoretical discussion of the origins of the conflict."