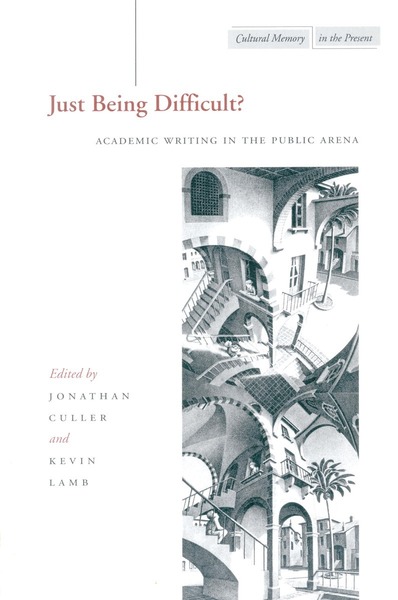 Just Being Difficult?
Academic Writing in the Public Arena
Edited by Jonathan Culler and Kevin Lamb
SERIES: Cultural Memory in the Present

Is academic writing, particularly in the disciplines of literary theory and cultural studies, needlessly obscure? The claim has been widely circulated in the media and subject to passionate debate, but it has not been the subject of serious discussion. Just Being Difficult? provides learned and thoughtful analyses of the claim, of those it targets, and of the entire question of how critical writing relates to its intended publics and to audiences beyond them.

In this book, a range of distinguished scholars, including some who have been charged with willful obscurity, argue for the interest and importance of some of the procedures that critics have preferred to charge with obscurity rather than confront in another way. The debate on difficult writing hovers on the edges of all academic writing that seeks to play a role in the public arena. This collection is a much-needed contribution to the discussion.