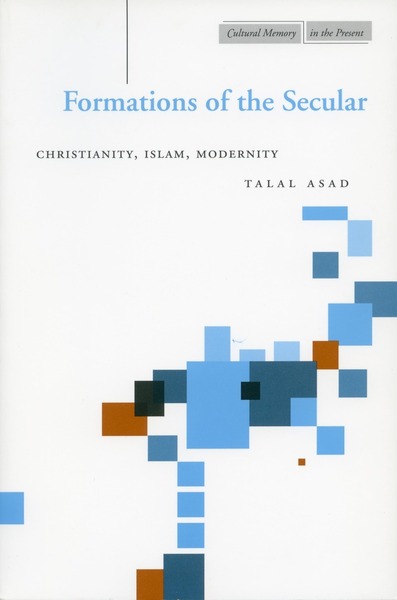 Opening with the provocative query “what might an anthropology of the secular look like?” this book explores the concepts, practices, and political formations of secularism, with emphasis on the major historical shifts that have shaped secular sensibilities and attitudes in the modern West and the Middle East.

Talal Asad proceeds to dismantle commonly held assumptions about the secular and the terrain it allegedly covers. He argues that while anthropologists have oriented themselves to the study of the “strangeness of the non-European world” and to what are seen as non-rational dimensions of social life (things like myth, taboo, and religion),the modern and the secular have not been adequately examined.

The conclusion is that the secular cannot be viewed as a successor to religion, or be seen as on the side of the rational. It is a category with a multi-layered history, related to major premises of modernity, democracy, and the concept of human rights. This book will appeal to anthropologists, historians, religious studies scholars, as well as scholars working on modernity.

Talal Asad is Distinguished Professor of Anthropology at the Graduate Center of the City University of New York. He is the author of Genealogies of Religion.

"A dark but brilliantly original work, Formations of the Secular is one of the most important books on religion and the modern in recent years."

"Formations of the Secular is also a difficult if stunningly eloquent book, a response both elusive and forthright to the many shelves of 'books on terrorism' which this country's trade publishers are rushing into print."

"This wonderfully illuminating book should be read alongside the author's Genealogies of Religion . . ."

"...Asad's brilliant study remains a defining piece of intellectual and scholarly contribution for all of those interested in exploring the religious and the secular in the modern era."

"...one of the most interesting scholars of religious writing today."