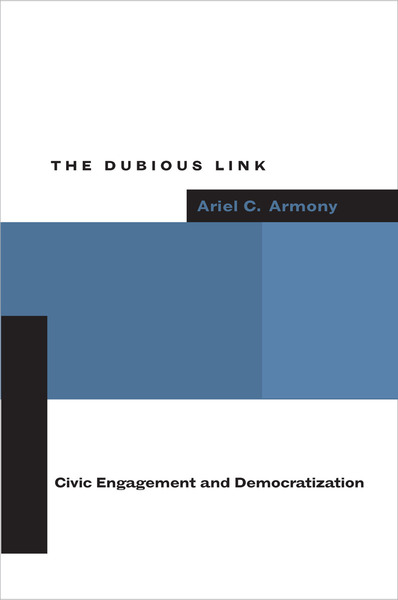 Made the 2004 University Press Bestsellers List, sponsored by Academia.

It is often argued that civic activity, such as the participation of average citizens in voluntary associations, benefits all democracies. But sometimes the involvement of citizens contributes to the collapse of democracy, the exclusion of minorities, and the deepening of society's fragmentation. This book challenges the idea of a positive, universal connection between civil society and democracy, and argues that the specific context in which people organize shapes the character of civil society.

The Dubious Link examines the "dark side" of civil society—the cases in which the participation of average citizens leads to undemocratic results. Combining a variety of research methods, Ariel Armony looks at the vital sphere of associational life in pre-Nazi Germany, anti-desegregation movements in the United States, and new organizations for human and civil rights in democratic Argentina. The book concludes with a statistical analysis of the impact of civil society on a set of contemporary democracies.

Ariel C. Armony is assistant professor of government at Colby College. He is the author of Argentina, the United States, and the Anti-Communist Crusade in Central America, 1977-1984 and coeditor of Repression, Resistance, and Democratic Transition in Central America.

"This book is a critical advancement of our understanding of civil society's role in the state-society relations of modern democracy. With its clear structure and in-depth case studies, it is an invaluable contribution to political science, sociology, legal studies, and Latin American studies."

"The question of whether and how civil society influences democracy is one of the central questions of our times. Ariel Armony presents an excellent, interesting, and important book that will be a great contribution to the central debates in the field."