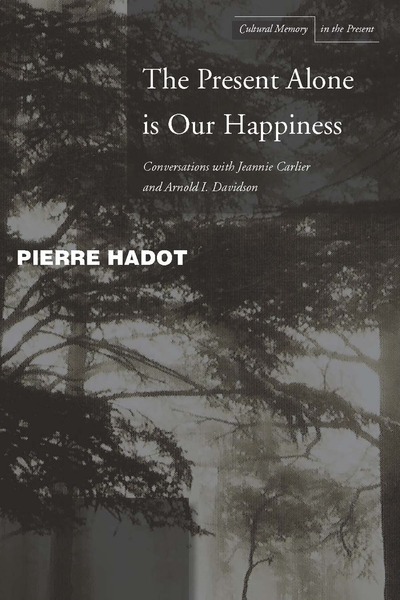 In this book of brilliantly erudite and precise discussions, Pierre Hadot explains that for the Ancients philosophy was not reducible to the building of a theoretical system: it was above all a choice about how to live one's life.

One of the most influential historians of ancient philosophy in the world today, Hadot is adept at using ancient philosophers to illuminate the relevance of their ideas to contemporary life. In this book, which is an ideal introduction to Hadot's more scholarly What is Ancient Philosophy?, we learn that to be an Epicurean is not merely to think like one; it is to adopt a way of living where limiting desires is the condition for happiness. Being an Aristotelian, similarly, is to choose a life that involves contemplation, and being a Cynic is to follow Diogenes in his refusal of quotidian convention and the mentality of ordinary people. If so many Ancient philosophers founded schools, Hadot explains, it was precisely because they were proposing how to live life on a daily basis. We learn here that the history of philosophy has been something more than just that of a discourse. The founding texts of Greek philosophy, after all, were notes taken from oral exercises undertaken in concrete circumstances and contexts, most often a dialogue between students and specific interlocutors who meant to shed light on their students' real existence. The immense contribution of this book, which also traces Hadot's own personal itinerary in a touching manner, is to remind us, through direct language and numerous examples, what the theoretical aspect of philosophy often masks: its vital and existential dimensions.

Pierre Hadot is Professor Emeritus at the Collège de France, where he held the Chair of the History of Hellenistic and Roman Thought. Most of his major works have been translated into English, including Philosophy as a Way of Life, What is Ancient Philosophy? (1995), and The Veil of Isis (2006). His most recent book is N'oublie pas de vivre. Goethe et la tradition des exercices spirituels (2008).

Arnold I. Davidson is Robert O. Anderson Distinguished Service Professor at the University of Chicago and Professor of the History of Political Philosophy at the University of Pisa. He has written widely on contemporary French philosophy, is the English language series editor of Michel Foucault's courses at the Collège de France, and is the author of The Emergence of Sexuality (2001).

Jeannie Carlier is Professor at the École des Hautes Études en Sciences Sociales. She has published essays on philosophy and religious practices in late antiquity and is a specialist in Neoplatonism.

"Hadot's refreshing efforts to free philosophy and its history from the sterile constraints of abstract theorizing and academic specialization find a lively and productive outlet in the interviews collected here. Introduced by Jeannie Carlier, a French scholar of Neo-platonic religious thought and friend of Hadot, and conducted in turns by Carlier and Arnold Davidson, the American philosopher and intellectual historian most responsible for the introduction and dissemination of Hadot's work in English-speaking contexts, these conversations explore in depth and varied detail both the personal and the intellectual development of a scholar whose own work insists above all that the personal or existential cannot rightly or fruitfully be separated from the intellectual or philosophical. Enacting the kind of dialogue that Hadot believes essential to any philosophy that would constitute a living relation between persons rather than an abstract relation to ideas, these interviews could not find a more suitable subject."

"If your own experience of 'Philosophy 101' way back when was just shy of miserable, disconnected from the daily or generally incoherent—gridlocked, for instance, in self-serving terms—here, in The Present Alone Is Our Happiness: Conversations with Jeannie Cartier and Arnold I. Davidson, a good-souled man—Hadot himself—winks. He seems to say, 'Here's what happened, and here's why philosophy really is for you.' And if you are a teacher or a pedagogue, it's for you all the more." 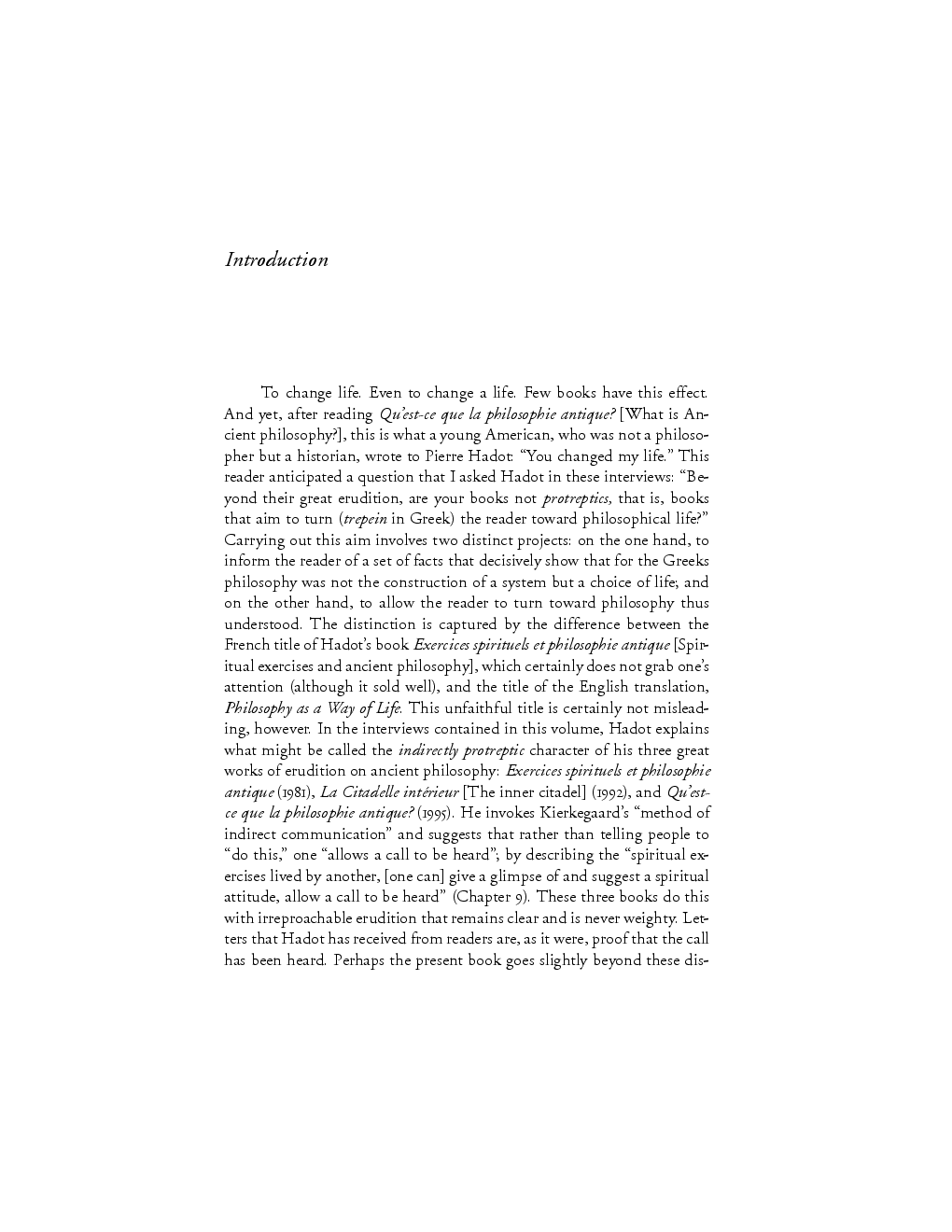 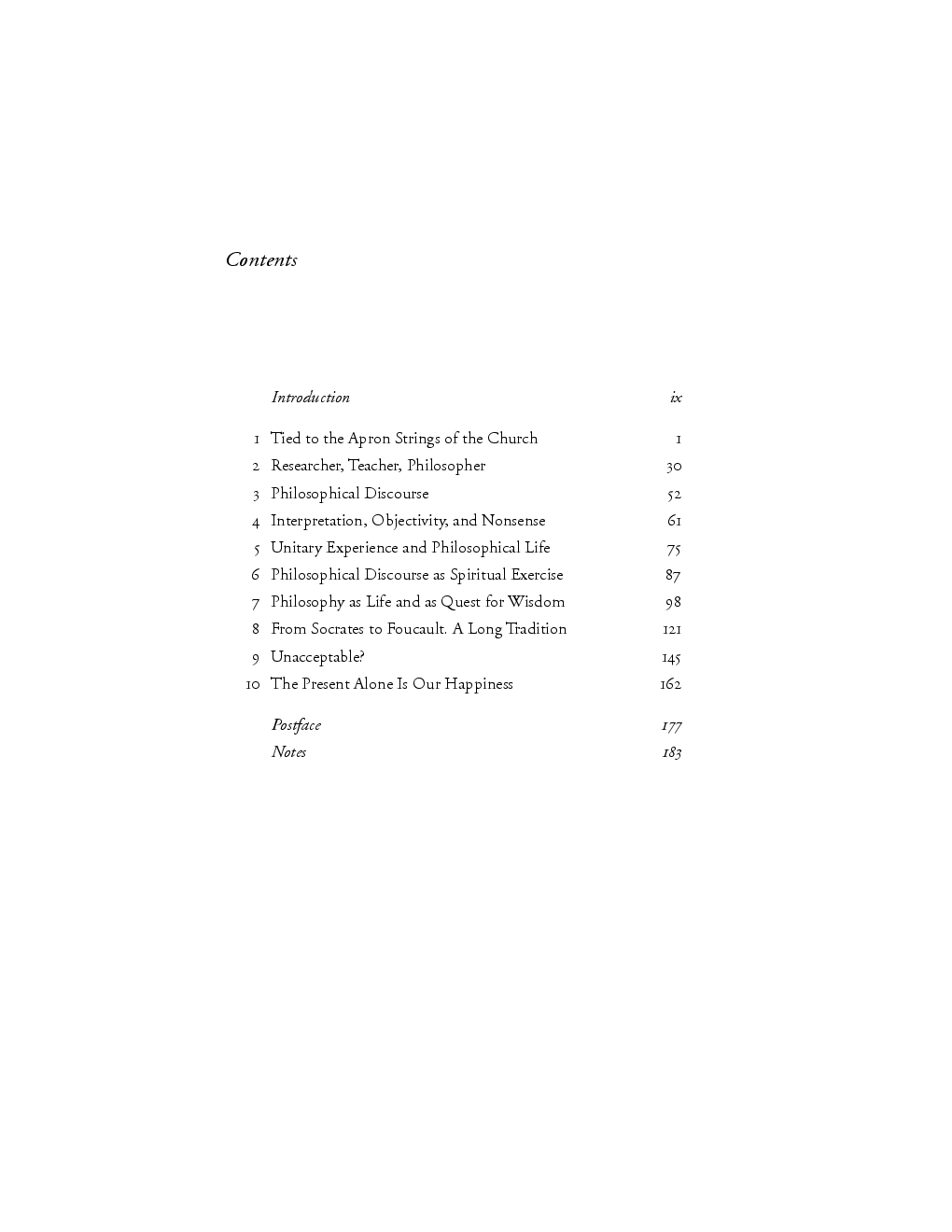