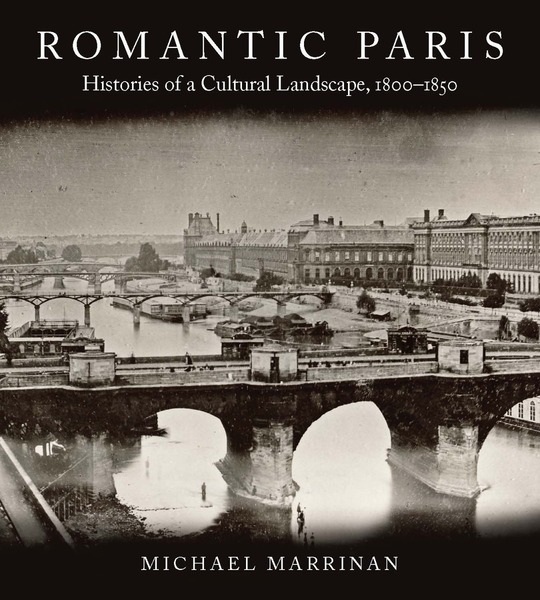 Romantic Paris is a richly illustrated survey of cultural life in Paris during some of the most tumultuous decades of the city's history. Between the coups d'état of Napoléon Bonaparte and of his nephew, Louis-Napoléon, Paris weathered extremes of political and economic fortune. Once the shining capital of a pan-European empire, it was overrun by foreign armies. Projects for grand public works were delayed and derailed by plague, armed uprisings, and civil war.

At the same time, Paris was the theater of a revolution in the arts that challenged classical culture by depicting the vagaries of contemporary life and the thrill of unbridled experimentation. "Romantic Paris" produced Delacroix's Liberty Leading the People and Courbet's Burial at Ornans. It was both the setting and inspiration for Hugo's Les Misérables and The Hunchback of Notre-Dame. Meyerbeer's Robert le Diable set new standards for operatic productions, and audiences thrilled to the virtuoso performances of Paganini and Liszt, Talma and Taglioni. Established patterns of living, eating, dressing, and sociability were retooled for new urban spaces, new modes of personal mobility, and new forms of public self-presentation.

The cultural legacy of Romantic Paris includes a museum that shelters fragments rescued from the rubble of the Revolution, as well as the display of masterpieces, open to one and all, that we visit today as the Louvre.. In addition, this period contributed an architectural legacy that now gives Paris its distinct and world-renowned reputation as a cultural and artistic center. In Romantic Paris, Michael Marrinan plots the zigzag trajectory of the monuments, spaces, and habits of a city that looks both to the past and the future with all the optimism, self-doubts, and creative energy of a culture poised at the threshold of modernity.

Michael Marrinan is Professor of Art History in the Department of Art & Art History at Stanford University. His writings include Painting Politics for Louis-Philippe: Art and Ideology in Orléanist France, 1830–1848 (1988).

"This is an expansive book, yet written with the verve and subtlety of a much more modest one. It belongs in the library of anyone who is interested in the architectural and urban development of modern Paris, in the aesthetic contortions of early and mid-nineteenth century France, or in the everyday life of the post-Revolutionary Parisian . . . The daunting result of a massive amount of research and original criticism, Romantic Paris should not intimidate, but should enthrall the intelligent and curious reader."

"[Romantic Paris] is an impressive addition to the genre of books on nineteenth-century Paris, particularly welcome in terms of urban history in so far as it covers the pre-Haussmann period, usually cast into the shade by the momentous and drastic initiatives of the Second Empire . . . This is a compendious, enthusiastic and engaging study, which one could with confidence put into the hands of students of nineteenth-century French art."

"The publication of Michael Marrinan's Romantic Paris: Histories of a Cultural Landscape, 1800-1850, will one day, I predict, be regarded as something of a watershed event in the historiography of early nineteenth-century French art and culture. The first serious, sophisticated overview of its subject to appear in many years, it has the breadth of a traditional textbook combined with the interpretive depth and methodological ambition of more specialized studies. Operating productively on several levels simultaneously, Marrinan's text has something to offer everyone, from undergraduates discovering the allures of Paris for the very first time to seasoned dix-neuviémistes whose sustained concentration on isolated aspects of post-Revolutionary French history and culture may have caused them to lose sight of the larger picture to which their objects of study belong."

"Marrinan's book is an original take on Romantic Paris, bringing together diverse aspects into a larger picture, evoking memory and history. His individual case studies are each interesting, and contribute to an expanded understanding of visual culture in Paris and its cultural landscape, 1800-1850."

"Well structured and throughly comprehensible work, as well as surprisingly inspiring read and one open to many legitimate interpretations . . . Marrinan's work is interesting, and offers something to the specialist as well as the common reader."

"This is a richly illustrated history of the visual and cultural life of Paris in the first half of the 19th-century. Informed by the theoretical construct of 'social space' as defined by scholar Henri Lefebvre in 1974, it aims to explore how Paris was reshaped and re-created by both the political and the economic changes of the time. Although not a guidebook, it strongly evokes the geography and emotional vibrancy of Paris when it was 'poised on the threshold of modernity.'"

"G. K. Chesterton once said that art should be 'centric' to society, not on the edges. In this portrait of Paris in the first half of the nineteenth century, Marrinan (art history, Stanford University) puts the art of the city at the center of the whirlwind of post- revolutionary France. He demonstrates how the art (including architecture and literature) both affected and reflected the period that saw the rise and fall of Napoleon, attempts at a republican government, abortive revolutions and the temporary restoration of the monarchy. With great skill, he weaves the changes in public taste and temperament into the art, showing how they influenced each other. For those who love Paris, art, history, or all of them together, this book is a wonderful intellectual treat."

"Michael Marrinan here delineates early nineteenth-century Paris, organizing, explaining, scrutinizing the details. Many efforts have been made to do this, but Marrinan's is remarkable for its clarity and effectiveness in bringing forward the little things which are, in fact, so big. They are the confusion, the richness of Paris and why one keeps going back. This is a remarkable work of synthesis, first in selection and organization, then in elucidation, and thirdly, in making fragments so different fit together so tellingly."

"This is a voracious book. It moves at a rapid pace, and in the process, succeeds in sweeping up all the diverse and colourful aspects of Parisian visual culture in the first half of the nineteenth century. Marrinan writes with tremendous brio, sharing his enthusiasm for this unique cityscape. His coverage of topics is remarkably wide but never at the expense of his judgement as a historian, which remains invariably sound." 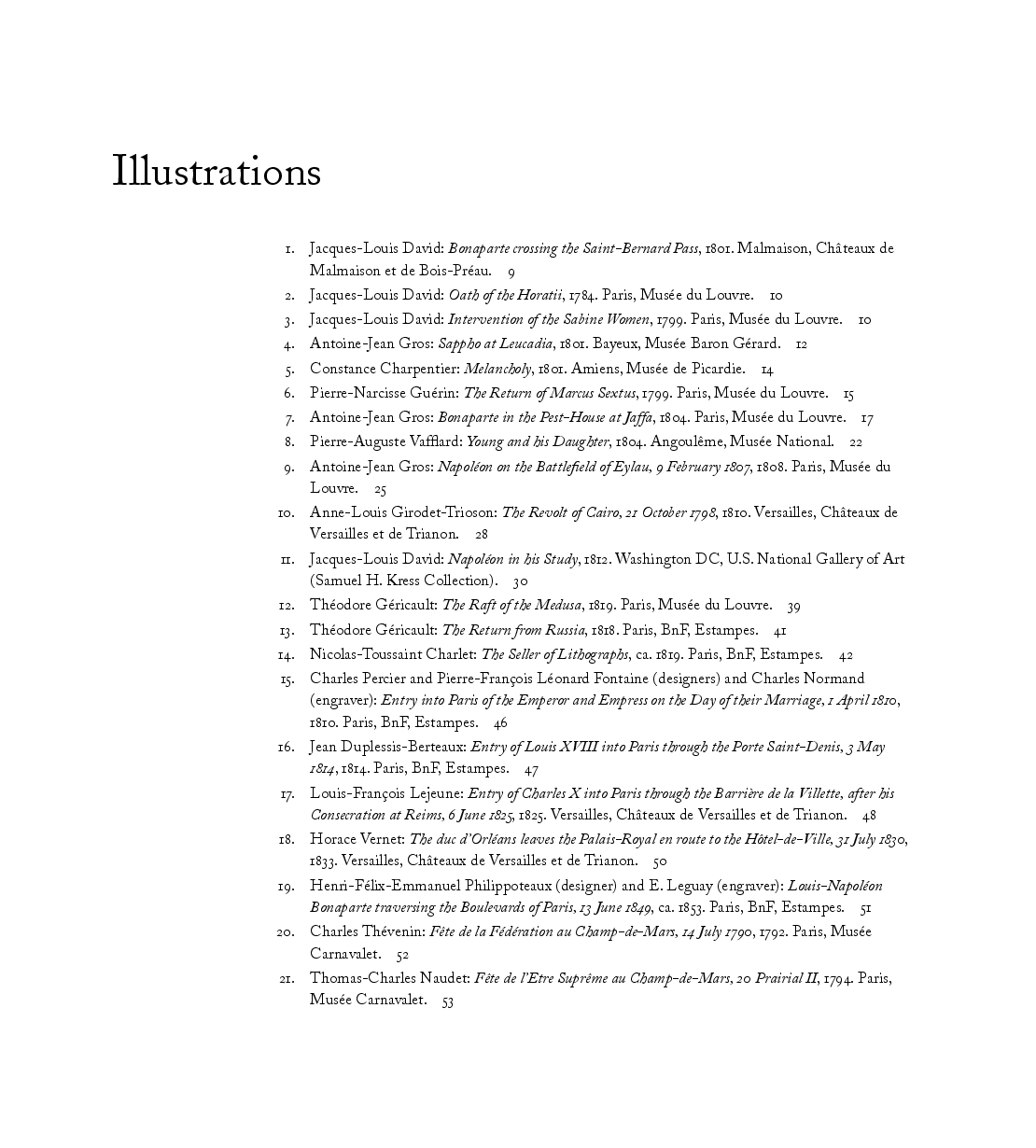 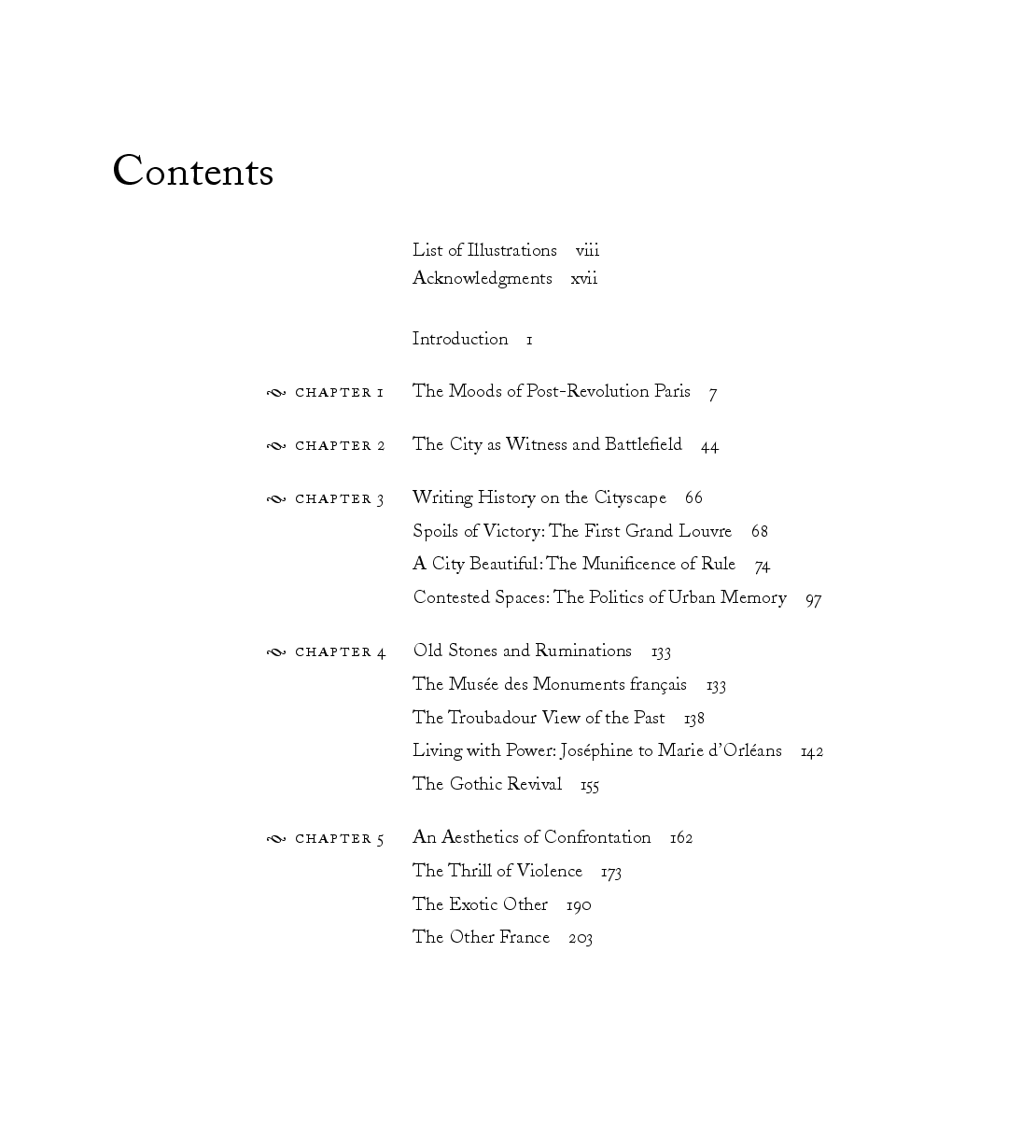