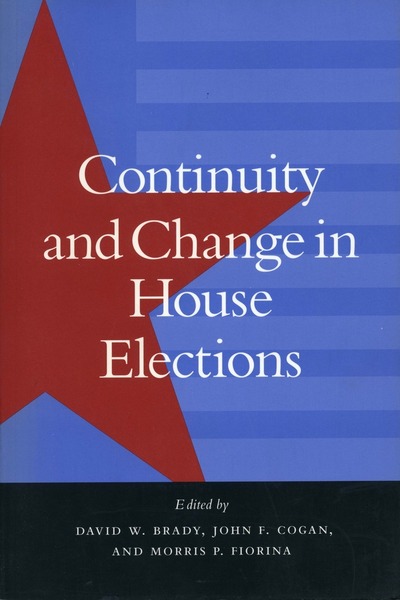 For two decades, extending from the early 1970s to the early 1990s, elections to the U.S. House of Representatives were highly predictable. More than 90 percent of incumbents would seek reelection and more than 90 percent of those incumbents would win—by larger vote margins than in earlier decades. The once-dependable presidential coattail effect diminished, as one-quarter to one-third of all voters split their tickets, supporting presidential and House candidates of different parties. These trends helped the Democrats retain control of the House even while Republican presidential candidates won five of six elections beginning in 1968. An era of “incumbency and insulation” seemed firmly in place.

Then came the 1994 midterm elections. The Republicans gained 52 seats in the House, taking control for the first time in 40 years. Incumbency appeared to have lost its semi-magical status as three dozen incumbents fell. Insulation, too, appeared to have failed, with all the losing incumbents being Democrats, most of them from districts where President Clinton had run poorly in 1992. But did 1994 herald a new era, or was it an aberration?

In some ways, the 1996 elections, which reelected President Clinton, ratified the 1994 upheaval. Republicans retained control of the House, despite the decline of ticket-splitting as more voters aligned their presidential and House voting decisions. The 1998 election results added to the picture of a new era in congressional elections as the presidential party gained seats in a midterm election for the first time since 1934.

Most of the essays in this volume closely examine these recent elections, documenting the erosion of incumbency and insulation, but pointing out important continuities as well. Other essays address the electoral consequences of political change in the South, majority-minority redistricting, PAC contributions, and the changing image of Congress.

"Given the relatively saturated nature of scholarship on congressional elections, it is indeed a compliment to say that Continuity and Change in House Elections, edited by David W. Brady, John F. Cogan, and Morris P. Fiorina, makes a significant contribution to the literature. It convincingly explains why the Republicans gained the majority in the House in 1994. Moreover, the contributors nicely point the way toward a new approach to House elections that more explicitly incorporates political parties and national-level policy into vote choice and election results. . . . This impressive collection articulates a convincing rationale, and demonstrates strong evidence, for [a new theory of congressional elections]."

—The Journal of Politics

"Virtually all of the articles in this collection are excellent. . . . The essays in this book provide important insights into the 1994 and 1996 elections. . . ."

"This edited volume is a major contribution to the literature on congressional elections. The chapters present solid empirical work and fit well together. In addition to providing a thoughtful analysis of the election of 1994, the editors have put together a volume that will give the reader an overview of the major trends, empirical measures, and theoretical questions that motivate this field of research."