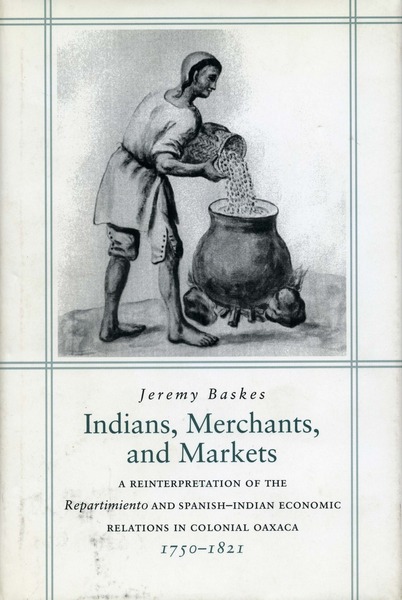 Traditional historiography describes the repartimiento de mercancías as a forced system of production and consumption in which officials of the Spanish crown compelled Mexican Indians to produce goods marketable in the Spanish economy and to purchase expensive and undesired Spanish products. The author challenges this conventional portrayal of Indian-Spanish economic relations by arguing that Indian market behavior was economically rational and voluntary. He further argues that the repartimiento was an institution designed to overcome market imperfections inherent in Mexico's colonial economy and to facilitate the extension of credit in a cross-cultural environment.

Examining repartimiento production of cochineal, a dyestuff produced exclusively by Oaxacan Indians and representing Mexico's most valued export after silver, this study shows that Indians produced cochineal for the market voluntarily because it provided them with needed income. The primary role of the repartimiento was to provide Mexico's indigenous peasantry with credit, without which they could not have participated in the market as extensively as they did. Owing to the difficulty of collecting debts, credit provision was monopolized by agents of the Crown, the alcaldes mayores, who alone possessed the legal leverage needed to enforce the payment of debts. Though Spanish officials profited from the repartimiento, their economic gains were not so great as traditionally believed.

Overall, the book demonstrates that Mexican Indians were much more actively engaged in the market than customarily imagined, and were adept at promoting their interests despite the discriminating policies of colonialism. The book rounds out its account of the repartimiento by examining the transatlantic trade in cochineal, especially in its late colonial decline.

"Indians, Merchants, and Markets is an important, well-researched addition to the small but growing literature on the repartimiento."

"His keen analysis of the Oaxacan case requires any future scholar of this subject to take his work into account."

"Economic historian Jeremy Baskes has gone a considerable distance in convincingly rehabilitating one of the most vilified instruments of colonial domination in Spanish America, the notorious repartimiento de mercancias. . . . [An] excellent work in economic history. . . . The closely reasoned revisionism of Baskes' study is very welcome."

"Baskes' study manages to provide the most detailed account yet of the economics of small-scale rural credit in late colonial Mexico, as well as a lucid quantitative reconstruction of the costs and complications of the commodity export business during that period. . . . His compelling arguments certainly do away with the old certainties and invite further research on Indians and markets in colonial Latin America."

"In this engaging monograph, Baskes reconstructs a tantalizing glimpse of the agricultural aspects of cochineal production . . . .[Indians, Merchants, and Markets] is a fascinating treatment of an undeservedly under-examined area of colonial Latin American history."