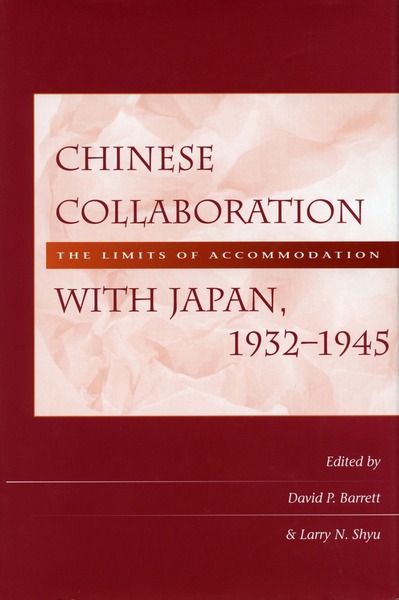 While wartime collaboration in Europe has long been the subject of scholarly attention, relatively little has been published about Chinese collaboration with Japan, largely because essential source materials were inaccessible. Recent liberalization of archival policy in China and Taiwan has made possible this book, the first comprehensive treatment of Sino-Japanese collaboration over the full course of the war, at the level of both state and of society.

Collaboration on the basis of a common “greater East Asian” interest was rare since the Japanese came as conquerors acting primarily to further their own national interest. But all Chinese living in the occupied areas had to decide on the degree to which they would accommodate Japanese power—whether political, military, or economic—in order to carry on with their lives. Whether it was Wang Jingwei as “head of state,“ or Chinese capitalists in Shanghai, or town and village elites in the rural areas, all sought to defend their interests while making the necessary concessions to the Japanese presence. However, even when Chinese sought a modus operandi with the Japanese, they found that a common and equal identity of interest did not exist. Whether expressed in terms of Chinese willingness to collaborate, or Japanese willingness to accept collaboration, the limits of accommodation for both were soon reached.

The eleven essays in the volume explore the issue of collaboration from a number of vantage points. In the political sphere, essays range from the foreign policy of the Nationalist government, through the establishment of Japanese client regimes in central China, to the response of local elites in northern and central China to Japanese invasion and occupation. Essays on economic and cultural collaboration focus particularly on the workings of collaboration in Shanghai, the key economic and cultural center of occupied China.

" . . . [Scholars] interested in the Japanese occupation of China and Chinese collaboration will find much of value in the book."

"The title of this book is enough to arouse interest since it deals with a particularly sensitive phenomenon in modern Chinese history: collaboration with the Japanese during the occupation. It is therefore very much to the credit of the two editors, David Barrett and Larry Shyu, to have brought together the papers presented on this subject during a conference held in Vancouver in December 1995, and devoted to the Sino-Japanese war. . . . This group publication contains a wealth of information useful to our knowledge and understanding of the period."

"By offering fresh perspectives on China's wartime collaborationism, the articles in this valuable anthology contribute significantly to our better understanding of the complexity of not only Chinese collaborationism but also nationalism."

"This is an extremely important volume of essays which provides a vital new perspective on our understanding of the 1937-1945 Sino-Japanese war."