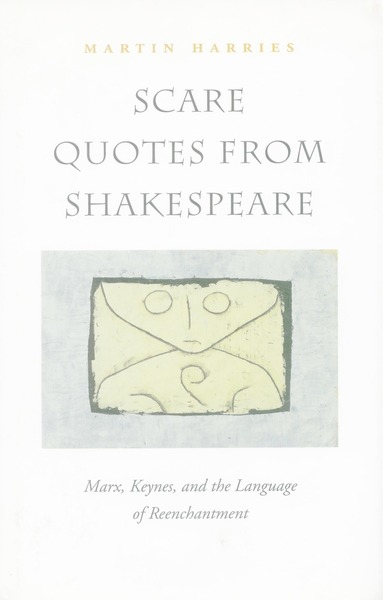 Scare Quotes from Shakespeare
Marx, Keynes, and the Language of Reenchantment
Martin Harries

This book argues that moments of allusion to the supernatural in Shakespeare are occasions where Karl Marx and John Maynard Keynes register the perseverance of haunted structures in modern culture. This "reenchantment," at the heart of modernity and of literary and political works central to our understanding of modernity, is the focus of this book. The author shows that allusion to supernatural moments in Shakespeare ("scare quotes") allows writers to both acknowledge and distance themselves from the supernatural phenomena that challenge their disenchanted understanding of the social world. He also uses these modern appropriations of Shakespeare as provocations to reread some of his works, notably Hamlet and Macbeth.

Two pairs of linked chapters form the center of the book. One pair joins a reading of Marx, concentrating on The Eighteenth Brumaire, to Hamlet; the other links a reading of Keynes, focusing on The Economic Consequences of the Peace, to Macbeth. The chapters on Marx and Keynes trace some of the strange circuits of supernatural rhetoric in their work, Marx's use of ghosts and Keynes's fascination with witchcraft. The sequence linking Marx to Hamlet, for example, has as its anchor the Frankfurt School's concept of the phantasmagoria, the notion that it is in the most archaic that one encounters the figure of the new. Looking closely at Marx's association of the Ghost in Hamlet with the coming revolution in turn illuminates Hamlet's association of the Ghost with the supernatural beings many believed haunted mines.

An opening chapter discusses Henry Dircks, a nineteenth-century English inventor who developed—and then lost his claim to—a phantasmagoria or machine to project ghosts on stage. Dircks resorted to magical rhetoric in response to his loss, which is emblematic for the book as a whole, charting ways the scare quote can, paradoxically, continue the work of enlightenment.

". . . . Martin Harries has produced a fascinating, detailed, and dense argument, whose twists and turns themselves betray the continued existence of the principle of the 'Scare quote' as he defines the genre."

"The whole thing is accomplished with much style, and turns and returns with great poise and ever-compounding intricacy; meanwhile its calculating audacities offer themselves in a winning and unembarrassed way."

"His reading of the scene in which Hamlet encounters the ghost is spectacular. Bringing together the language of mining with that of military conflict, coinage, and wealth-generation, this part of Harries' book shows him at his best. His linguistic assiduousness meets his awareness of the play's central themes and its cultural context in a manner that both illuminates the play and reinforces his claim that 'it is precisely Hamlet's figuring a modernity inextricably linked to ghostly injuctions that makes the play so telling an icon of modernity.'"

"Even as a study of Shakespearean textuality in Marx and Keynes, this is an inventive and significant book. But it aims at more than that. Harries also employs Marx's and Keynes's 'readings' of Shakespeare as entryways into Hamlet and Macbeth, leading to original analyses of both plays. He offers a fascinating cultural history of phantasmagoria in nineteenth-century theater and culture, and he engages in a wide-ranging philosophical investigation of how the capitalist economy 'reenchants' our supposedly secularized modernity."